A Dairy in the Desert: A Couple’s Quest to Improve Nutrition and Provide Jobs in East Africa 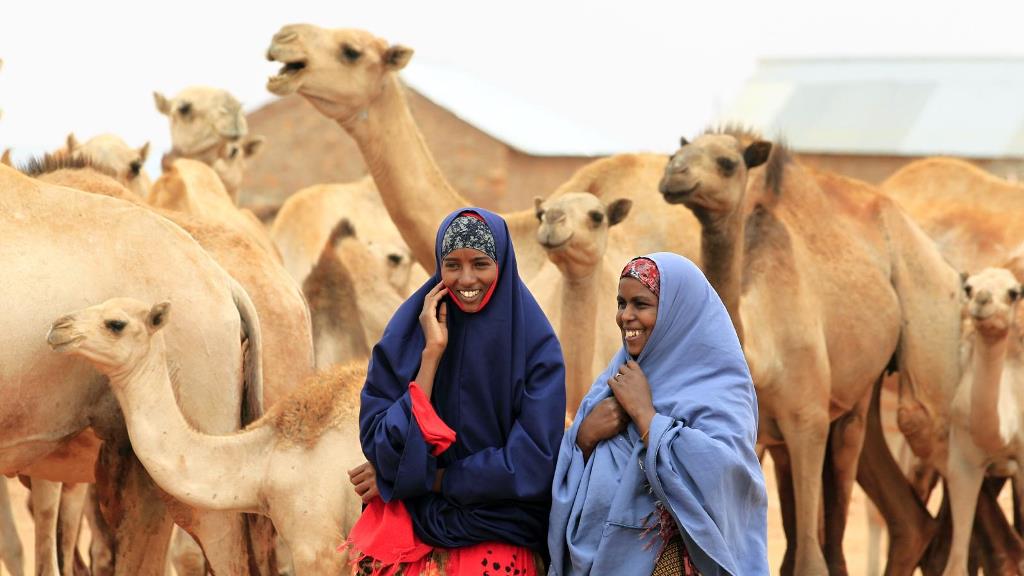 Roughly 50 percent of the world’s camel population  is found in Sudan and Somalia, where they are primarily bred for milk production – a primary source of protein and a key economic driver for people who live in arid environments. Joan Leonard and Michael Vigoda are supporting an innovative research program at the University of Torino in Italy, which works with Sudanese scientists to identify the gene that leads to increased milk production in female camels.

Humans have relied on camels for transportation and food for thousands of years – and millions of people across the globe still depend on camels for their survival today. In the arid lands of East Africa, where scarcity is a way of life, camel milk is a key source of nutrition. Increasing the amount of milk that a female camel can produce would provide a welcome boost to local communities – in terms of food security and extra revenue.

That’s where Joan Leonard, a former hospital administrator, and Dr. Michael Vigoda come in. Over the last few years, the couple has provided financial assistance to support research conducted at the University of Torino, which aims to raise the nutritional quality and production of camel milk through selective genetic camel breeding.

The husband and wife duo first heard of the research project through Dr. Carlo Grignani, a longtime friend of Leonard who now oversees the Department of Agricultural, Forest and Food Sciences at the University of Torino. Leonard and Grignani had met in high school nearly 45 years ago, when Grignani was an Italian exchange student studying in Wisconsin. They stayed in touch, and became close family friends.

Upon retiring from hospital administration, Leonard turned to editing, and worked with Grignani and his colleagues to improve the written English in their research papers, so they could be published in English scholarly journals. It was through this work that she stumbled across the project on camel milk spearheaded by Professor Alfredo Pauciullo.

Leonard and her husband say that “the project matched perfectly with our dreams of making a difference in Africa through education.” She explains that “We also wanted to support Carlo’s department, not only because he’s a close friend, but because we trust his research team.”

A Longstanding Interest in Africa

The research project on camel milk isn’t the couple’s first foray into East African matters. In 1988, the two ventured to Ethiopia, at the peak of the AIDS epidemic. While there, Vigoda, a pediatrician at the time and pediatric anesthesiologist today, noticed a number of medical health hazards in how Ethiopian patients were being treated. “Much of the UNICEF medication was expired. Some were for intravenous use only, which was problematic because the local practice was to reuse needles.”

This experience sparked the couple’s interest in backing projects to bolster the health and socioeconomic standing of communities in Africa.

“KBFUS has just made donating very easy and the entire staff has been so warm and welcoming.”

Challenges Along the Way

When Leonard and Vigoda originally committed to funding the research on camel milk, they intended to sponsor five African students who were pursuing their master’s degrees. That was easier said than done. “Many Africans who study in Europe would rather stay in Europe after their studies,” she says. “It was extremely difficult to find a student who planned to return to Africa and disseminate the knowledge.”

Pauciullo and Grignani eventually identified Sabah Ahmed, a Sudanese master’s degree student, who was searching for a PhD program to continue the work she was doing at Tumbool Camel Research Center in Madani, Sudan. But even then, there were unforeseen challenges: Ahmed had to postpone her start date at the University of Torino by six months due to the ongoing armed conflict in the Darfur region of Sudan.

Working with KBFUS, Leonard and Vigoda made a first $25,000 grant in 2018, which paid for Ahmed’s time to collect camel milk samples from throughout Sudan. Their next contribution will support her three years of doctoral research on camel milk production, and genetics work under Pauciullo at each of the partnered universities. The researchers hope that at the project’s culmination, they will have identified the specific gene that triggers increased milk production in female camels. Armed with that knowledge, they will work with Sudanese camel farmers to start breeding more profitable camels with a higher milk yield.

“Creating your own foundation sounds great in principle, but the effort to get it started can be daunting, particularly for individual donors. Our goal was to put our money to work – not to create something with our name on it .”

The global market demand for camel milk products has steadily increased over the years, as its purported health benefits attract new consumers. While Sudan boasts the second largest camel population in the world – estimated at around 3.5 million heads – its milk productivity remains relatively low and its camel dairy business is still in a primitive stage, with market penetration limited to local markets. Still, “the camel sector in Sudan has a high growth potential, and an injection of money to further professionalize the sector could radically elevate the lives of East African camel herders,” says Leonard.

Leonard and Vigoda envision donations of more than $350,000 to support the camel milk research and to disseminate learned practices into the community. Vigoda notes that this funding will be “predicated on our learnings from this project, and could lead to complimentary projects or spin-off initiatives.” Additionally, the research will help strengthen the relationship between the University of Torino and its research partner on this project – the University of Khartoum, the largest and oldest university in Sudan.

“The camel sector in Sudan has a high growth potential, and an injection of money to further professionalize the sector could radically elevate the lives of East African camel herders.”

Leonard and Vigoda had sponsored some public radio initiatives in the U.S. in prior years, but felt their dollars didn’t go very far. They also sought a more personal connection to the mission, and a greater say in how the money was ultimately distributed.

“We didn’t feel that fulfillment, that connection,” says Leonard.

They decided to pursue funding opportunities overseas, where they were hoping to make a bigger difference. To structure their giving, they first tossed around the idea of setting up their own foundation but quickly realized that starting and operating a private foundation would require extensive effort at a time when they weren’t sure where they wanted to give their money or which philanthropic initiatives best aligned with their interests.

“Creating your own foundation sounds great in principle, but the effort to get it started can be daunting particularly for individual donors. Our goal was to put our money to work – not to create something with our names on it,” says Vigoda.

So Leonard took to the internet, researching other ways to give money to foreign countries, such as Italy in particular, and still receive a tax deduction. That’s when a Google search led her to KBFUS. “It’s just been a super experience so far,” says Leonard. She recalls the first time she reached out to the foundation: “I wrote them an email and I said, ‘I’ve been looking for something like this for quite some time. Is this really real?’ KBFUS has just made donating very easy and the entire staff has been so warm and welcoming,” Leonard adds.

Better yet, says Leonard, “They’ve been very understanding about our financial and organizational concerns. We were able to find a country that is impoverished and provide financial assistance. And as we know from our Ethiopian experience and the effort to get Sabah Ahmed to Turino, things don’t always work out the way we want. But we have confidence in the foundation and who we’re giving our money to.”