A Memling for Bruges: A 15th-Century Painting by the Great Master Returns to the City of its Making 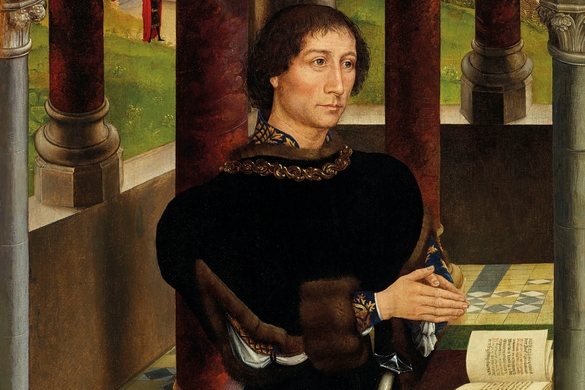 Ambassador J. William Middendorf II has had a long and distinguished career – as a naval officer, an investment banker, a diplomat, and as Secretary of the Navy. His true passion is for the arts, and he is both an accomplished artist and an avid art collector. Inspired by his love of Bruges, he decided that a painting by Hans Memling, one of the world’s great masters, would go back to the city of its making. KBFUS was delighted to facilitate such a generous gift.

John William Middendorf II started drawing when he was four. And at 95 years young, he still pursues his most passionate, lifelong endeavor. “If it moves, I sketch it,” he says from his home in Little Compton, Rhode Island.

“I’ve been interested in art all my life. ”I’ve recorded all my children’s and grandchildren’s activities on paper over the past 50 or so years. I’ve just put them together in a three-volume book, and I’m still churning out five or six pieces a week, even though I’ve now lost most of my eyesight”, he says.

Middendorf is also an avid collector of Flemish and Dutch masters, which he considers to be some of the finest art in the world.

He recently gifted a painting by Hans Memling to KBFUS, which can now be admired at the Memlingmuseum in Bruges, Belgium. The painting -a portrait of a praying nobleman- is believed to be one of Memling’s earliest known works, dating back to c. 1460-1470.

Life on the World Stage

After receiving a Bachelor of Naval Science in 1945, Middendorf served for two years in the U.S. Navy during WWII. He went on to earn a BA from Harvard in 1947 and an MBA from NYU in 1954.

In 1969, he left an investment banking career when he was appointed U.S. Ambassador to the Netherlands. He was named Secretary of the Navy in 1974, and later served as Permanent Representative to the Organization of American States and after that to the predecessor of the European Union.

“Memling, I think, is one of the world’s great masters, and he was a prominent citizen of the city. And Till-Holger Borchert, the Director of the Bruges Museums, is one of the great art historians in the world, whom I admire tremendously. All OF these factors played a part in my decision that the painting would go back to Bruges where it belongs.”

During his diplomatic career, Middendorf composed hundreds of compositions, an opera and nearly a dozen symphonies, including the Holland Symphony for the 25th anniversary of the reign of Juliana, Queen of the Netherlands – which was recorded on Dutch National Television. He joined with Joep Nicolas, the last of the Great Limburg School of stained glass makers, to make the last window in Delft cathedral. The window is 80’ tall and stands a few feet from where Vermeer is buried in the floor below.

He also had many opportunities to sketch some of the world leaders he met over the years. “Eisenhower, Nixon, Ford, Reagan, Margaret Thatcher, and pretty much everyone I ran into,” he says. “I found that if I wrote notes on their speeches, they would be filed away in a drawer, never to be seen again. But if I made a sketch of them, I was somehow able to remember the important parts of what they said, many years later.”

Creating art and composing music brought joy and a sense of balance to his life. “As ambassador, most of the time I was involved in trade negotiations and other rather static sorts of affairs. Art was such great relief from the hard grind of diplomacy and economic and military activities,” he says.

A long-held passion for old masters . . .

Middendorf is not only an artist himself, but has long been a collector of old masters paintings. “I have a collection of Dutch and Flemish Masters, some of which are regularly lent out to museums. Over the years I’ve given many paintings and whole collections to museums. As long as 60 years ago, I became a major donor of the Metropolitan Museum, where they carve one’s name in the marble stairway.”

Born in Germany around 1430, Hans Memling was working in the Brussels workshop of Rogier van der Weyden by 1465. He later settled in Bruges, where he became one of the most influential northern European artists of his time. His religious paintings often incorporated portraits of his wealthy patrons – bankers, merchants, politicians, clergymen and aristocrats.

. . . and a love of everything Bruges

“I’ve been visiting Bruges for 55 years,” says Middendorf. “It’s one of those rare world treasures, preserved largely as it was in medieval times. Its beauty and my passion for the paintings that echo down through the centuries is what has drawn me back there over the years.”

“Memling, I think, is one of the world’s great masters, and he was a prominent citizen of the city. And Till-Holger Borchert, the Director of the Bruges Museums, is one of the great art historians in the world, whom I admire tremendously. All of these factors played a part in my decision that the painting would go back to Bruges where it belongs.”

“So not only will we have a great Memling. We will also have a painting that keeps alive the memory of a great collector.”

A Spanish ambassador on a triptych

Till-Holger Borchert is an acknowledged expert in Early Netherlandish paintings. He has worked as Chief Curator of the Groeningemuseum since 2002 and as Director of the Bruges Museums since 2014.

“The Bruges Museums present world-class art and heritage in 14 monumental locations,” says Borchert. “These include Sint Janshospitaal, one of the oldest hospital buildings in Europe, now known as the Memlingmuseum; the Groeningemuseum, which houses a treasure trove of Flemish Primitives; and the Gruuthusemuseum, housed in the 15th-century city palace of the Lords of Gruuthuse.”

The Memling painting is most widely believed to portray Francisco de Rojas, the Spanish ambassador to the Burgundian Court. “The painting is the left wing of a triptych,” Borchert says. “The right wing is of a woman reading, often associated with the reading Mary. But we have no idea what the middle panel depicted, although some clues indicate that it might have been a crucifixion.”

In the early nineties, when Borchert was living in the U.S., he first saw the painting hanging in the home of a private collector in Cincinnati. After the owner died, his heirs honored his wishes and lent the painting to Bruges, where Borchert curated an exhibition. “In fact, that is where I met Bill Middendorf,” he says. Middendorf subsequently purchased the painting when it went up for auction in 2002.

A gift beyond measure

“This is the first time we receive such an important donation,” Borchert says. “It is one of the very few examples that we will have to remind us of the Spanish presence in Bruges during the middle ages. The city was an important trading hub at that time. While we have a lot of archives documenting the presence of Spanish merchants, we don’t have many images showing them. So having a depiction of a prominent Spanish family makes it very interesting, especially as it is by Memling, another prominent citizen of Bruges, and an extremely important artist.”

Borchert adds that the source of the gift brings an even deeper meaning. “I’ve known Bill Middendorf since 2002 and he has become a friend. I feel extremely honored that he thought of us. Bill is a remarkable person – part of a generation of great collectors that has shaped the taste of the American public. So not only will we have a great Memling. We will also have a painting that keeps alive the memory of a great collector.”

A couple of years ago, KBFUS launched KBFUS ART to help U.S. donors navigate the cultural, legal and tax complexities involved in donating art overseas. Borchert says that KBFUS played a vital role in enabling the painting’s return to Bruges.

“There is only one way to say it. The process was extremely smooth, and everyone at KBFUS was very helpful. They were working miracles,” says Borchert. “On so many different levels it has been a fantastic thing that has happened. I still can’t believe it’s actually real.”