After success at home, philanthropist and LGBT rights activist turns to Africa and Eastern Europe 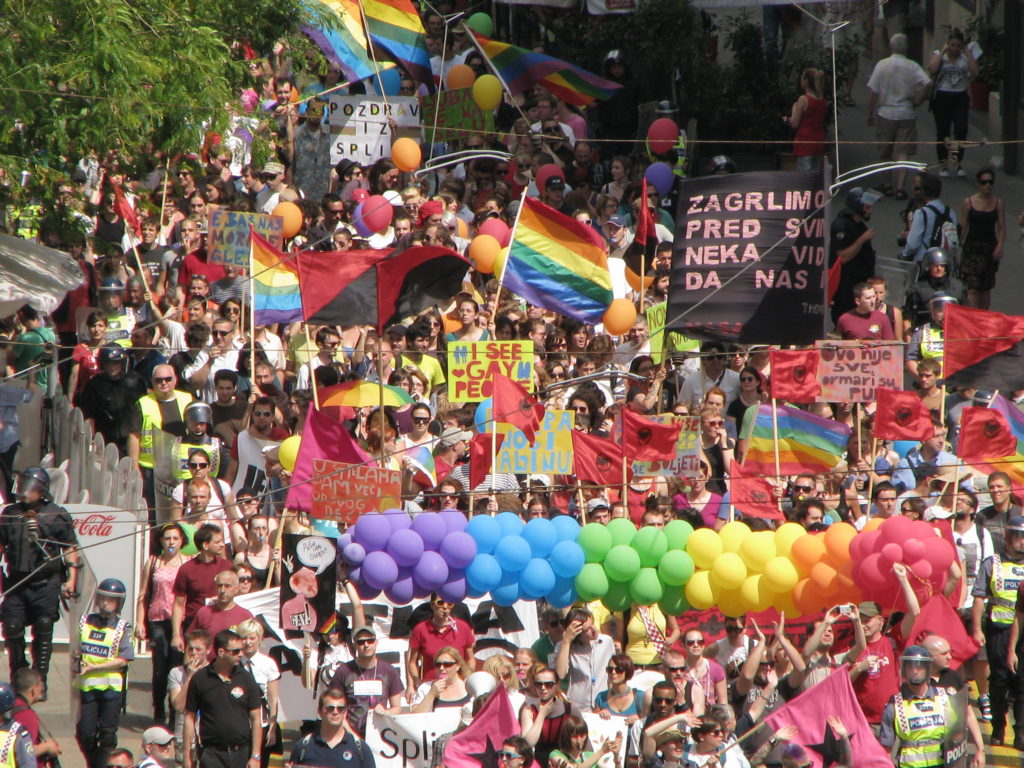 Charlie Rounds has had a long and successful career, first with a LGBT travel business, and later with some of the key players in the LGBT rights movement. Following the legalization of same-sex marriage in the United States in 2015, he decided to turn his energy to other parts of the globe, where being gay still comes with huge, sometimes life-threatening challenges. Through four American friends funds managed by KBFUS, Rounds has mobilized American generosity to support African and Eastern European nonprofits that promote tolerance, fight homophobia and discrimination, and increase public awareness of the LGBT community.

Native Minnesotan Charlie Rounds comes by his social and philanthropic activism naturally. He remembers stories of his maternal grandmother cooking an entire meal for a dollar, and ensuring there was food left over so people in the neighborhood who were hungry got something to eat.

“And my mother was a radical social and anti-war activist,” says Rounds. “She started the first Amnesty International chapter in Minnesota and fought hard for social justice causes and civil rights.”

Rounds says that because both his parents grew up extremely poor, they made the decision to work hard, taking on multiple jobs to ensure he and his three siblings each received a university education.

Armed with degrees in linguistics and French, Rounds joined the Peace Corps and headed to Cameroon. There he taught intensive French to other Peace Corps volunteers for three years.

A travel business with a mission

After leaving Cameroon, Rounds spent a year in Washington DC, where he started his career in the travel industry. In 1988, he returned to his home state of Minnesota to work for RSVP Vacations, one of the country’s first openly LGBT travel businesses, created by Kevin Mossier. Rounds eventually became a partner in RSVP Vacations.

“Back then, being gay and owning a business focused on gay travel was not as easy as it is today,” says Rounds. “But Kevin was a brilliant, driven entrepreneur. He faced discrimination firsthand while on vacation with his boyfriend, and he was determined to provide a safe travel experience for other LGBT people and their friends and families. He had a vision and he made RSVP Vacations a huge success.”

“The current climate for LGBT communities in Eastern Europe is getting worse by the day.  That’s why providing funding for organizations like Prague Pride, Zagreb Pride and KPH Poland is so important.  We need to get behind these organizations right now.”

The right time for a financial boost

Before his untimely death in 1996, Kevin Mossier established a foundation to provide financial support to LGBT rights organizations. The Kevin J. Mossier Foundation became the first foundation funder of marriage equality in Minnesota, and gave away millions of dollars before sunsetting in 2014. Rounds was one of the foundation’s five trustees and was also a member of the Civil Marriage Collaborative, a consortium of foundations fighting for gay marriage.

“The collaborative started winning states and we felt we had the momentum to get marriage equality across the country,” he says. “We never thought we would get it as fast as we did but we were picking up steam. We got rid of the military ban on LGBT recruitment. We were getting more and more corporate support. I felt that the tide was turning on LGBT rights, and I believed that a bigger investment would push things forward faster. The time was right.”

“That’s why our board at Mossier spent down the foundation by 2014, giving all the money to organizations leading the fight across the country for everything from marriage equality, to training teachers to help LGBT kids, to preventing youth suicide.” Same-sex marriage became legal in all 50 states in 2015.

Rounds is now the pro bono Program Director of the Mossier Social Action and Innovation Center, which began operations in 2018 and partners with Minnesota-based corporations, institutions of higher education, and other nonprofits working across the globe in countries where it’s difficult or even illegal to be part of the LGBT community.

“We never fund projects,” says Rounds. “We are fanatical about funding only general operating support. We get to know an organization and if we believe in its mission, we support it. They have to pay salaries, they have to keep the lights on. We support the organization and they decide how they will use the money. It’s a matter of trust and confidence.”

Rounds is also the Executive Director for Alturi, an NGO named for the gay British World War II code breaker Alan Turing, whose work saved thousands – possibly millions – of lives. The same government he served later persecuted him for his sexual orientation and he died of suicide at age 41.

“Alturi brings together up-to-date stories of what’s going on with the LGBT community globally. It’s a one-stop resource for what’s happening in all countries where activists are fighting for LGBT rights.”

“The current climate for LGBT communities in Eastern Europe is getting worse by the day,” says Rounds. “The Russian president has emboldened far right movements in the region. Look at Chechnya. Look at Hungary, where there is a huge neo-fascist movement going after the Romas, going after the Jews, going after the gays. So that’s why providing funding for organizations like Prague Pride, Zagreb Pride and KPH Poland is so important. We need to get behind these organizations right now.”

The Open Society Foundation asked Rounds to conduct a training in Prague to help organizations in Eastern Europe learn to do fundraising. “They were told ‘You’re no longer socialist countries. You’re capitalist countries. You have to learn to start raising your own money. And that was a big shift for them. The concept of asking corporations or individuals for donations was absolutely foreign to them. So we wanted to be able to help them raise funds in the United States.”

“The concept of asking corporations or individuals for donations was absolutely foreign to them.  So we wanted to be able to help them raise funds in the United States.”

The prize also offers its winners unique opportunities to increase their visibility and promote their cause to international audiences.

The Mossier Social Action and Innovation Center partners with KBFUS to channel its support to LGBT rights groups in both East Africa and Eastern Europe. In Africa, Mossier and KBFUS have worked together to support LGBT initiatives in refugee camps.

“The great thing about KBFUS is that they’re so easy to work with. It’s such an exceptional way for U.S. donors to put their charitable contributions on the ground where it’s needed most. It’s the single most effective way to actually help an organization you believe in. Our goal is to give the organizations we believe in the most amount of money possible. Prague Pride is our most successful collaboration with KBFUS. We helped raise a couple of hundred thousand for them.”

Rounds says one of the most important interactions between Mossier and KBFUS came in mid-2017 when anti-gay purges in the Chechen Republic targeted people on their perceived sexual orientation with abduction, imprisonment and torture. “We had KBFUS on board, and we had the Friends of KPH Campaign Against Homophobia opened on their books. So we were able to instantly transfer money to them, to help get people at risk out of Chechnya.”