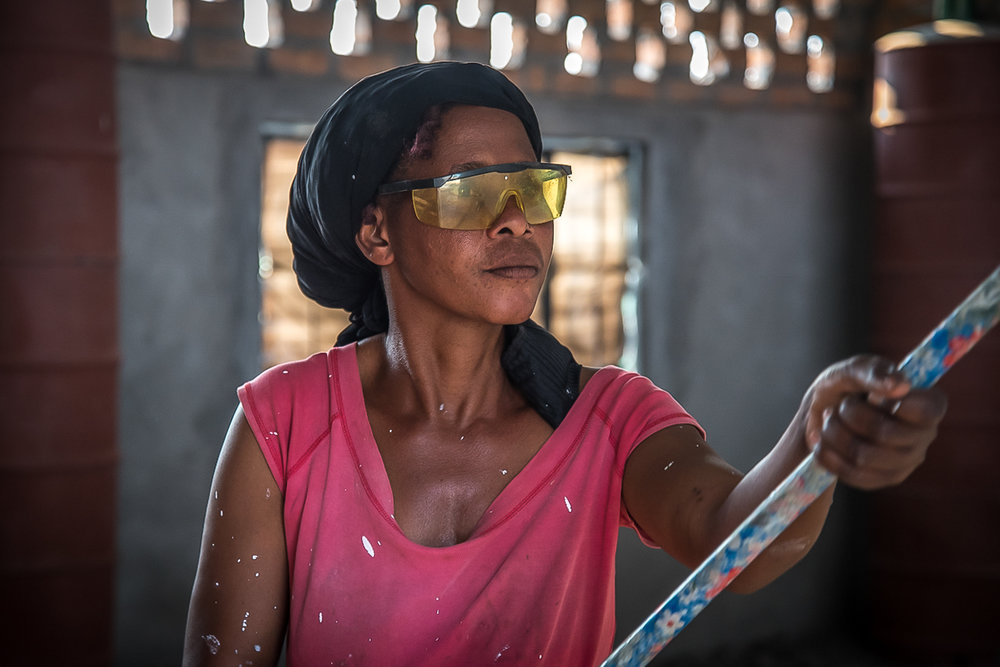 In much of the world, cultural assumptions ab out gender determine which jobs are appropriate for women. Jobs dominated by men are often seen as physically demanding or intellectually challenging. They also pay substantially higher wages than jobs in female-dominated fields. Buildher and AkiraChix, two Kenyan nonprofits, question the status quo and prepare East African women for higher-paying jobs in non-conventional fields.

Over the past decade, Kenya has been working hard to diversify its economy. The country is one of the most developed in the East Africa region. Its three-billion dollar construction industry formally employs more than 150,000 people and is predicted to steadily grow in the coming years. Kenya is also home to Silicon Savannah, a billion-dollar technology ecosystem comprised of more than 200 Nairobi-based corporations – some startups, others already well established.

These growing sectors -construction and technology provide high-paying jobs that are overwhelmingly filled by men. The exclusion of women from these nonconventional fields is nothing new. Most women in Kenya and over 90% of women across the sub-Saharan region currently work in the informal sector. However, growth forecasts over the next 20 years predict that there will be a shift and that the proportion of women working in the formal economy will grow dramatically in Kenya.

In the field of STEM (science, technology, engineering and mathematics), AkiraChix provides young women with 21st-century technology skills, enabling them to move out of the vicious cycle of low-skills, low-wage employment. Its codeHive program trains women tech leaders – using a holistic approach that builds their expertise, increases their agency, and helps them develop their networks.

After ten years abroad -bouncing from Seattle to Johannesburg- she returned home in Nairobi and started working for a construction firm which was building commercial properties. “My hope was to learn how to practice architecture commercially, and to make money from what I love,” Gatere says.

We need more women in growing sectors such as construction, not only so that their voices are incorporated in critical areas of our development, but also to ensure that they benefit from higher-paying jobs and fare better in the future.

She honed her craft during the day, catering to some of the wealthiest residents of the city. But when Gatere returned home in the evenings, she would pass by informal settlements and low-income neighborhoods. “I would see people who couldn’t afford to live where I lived, and whom the city of Nairobi was certainly not designing or building for,” Gatere says.

Gatere is driven by the belief that when meaningfully supported, women can be successful in the male-dominated architectural and construction fields.

Buildher’s program participants typically come from similar settlements and neighborhoods that Gatere once passed on her way home. As their home environments are often poor and challenging, Buildher’s programming includes life skills training, work readiness, mental health coaching, nutritional assistance and physical conditioning. But the bulk of its program focuses on the development of technical skills in carpentry, joinery, painting, plastering and partitioning.

After joining the training program, participants transition to one of Buildher’s employment partners as semi-skilled workers, where they can practice their newly learned trade over the course of eight months. At the end of their paid placements, the young women can join the labor market as skilled laborers.

“We need more women in growing sectors such as construction, not only so that their voices are incorporated in critical areas of our development, but also to ensure that they benefit from higher-paying jobs and fare better in the future,” says Gatere.

Bridging the Gender Gap in Technology

Linda Kamau is the co-founder and managing director of AkiraChix, which is based in Nairobi and prepares women to enter the fast-moving technology sector. Kamau earned a degree in business information technology from Limkokwing University, Malaysia. An experienced software engineer, she spent much of her career in the private sector as one of the few females in her field.

AkiraChix was founded in 2010 by a group of women who were passionate about technology and wanted to challenge the status quo by encouraging and facilitating more women to take up careers in technology-related fields.

“We tried to find where the women were but couldn’t find them. So we decided to bring them to the tech industry,” she says. AkiraChix primarily serves women from underprivileged backgrounds, most of whom have no access to tertiary or college education, and typically have no prior exposure to STEM.

We tried to find where the women were but couldn’t find them. So we decided to bring them to the tech industry.

Gatere has witnessed the considerable impact that her programs have had on young women. Since the launch of its first official program in March 2019, Buildher has trained 170 women. Prior to joining Buildher, most participants earned less than $9 a week. After a mere four months with the organization, their incomes jumped to around $9 per day – a huge increase which has the capacity to change the trajectory of their lives and the lives of their families.

With a ten-year goal of training over 10,000 African women, AkiraChix has trained 240 to date, and its class of 2020 boasts a 95% work placement rate. Its graduates – which include Kenyans, Ugandans and Rwandans – have seen their earnings increase considerably, thanks to their new careers in STEM. The average wage of its codeHive graduates has increased from $100 to $350 a month – higher than 54% of Kenya’s formally employed population.

They have developed programs that seize opportunities and help resolve local challenges.

The gender-focused missions of Buildher and AkiraChix deeply resonate with Lisa Issroff, co-founder and president of the Issroff Family Foundation, which supports and collaborates with organizations that increase access to education, encourage entrepreneurship, and foster opportunity in East and Southern Africa and New York.

For Issroff, the ability of Gatere and Kamau to recognize and pinpoint their communities’ needs stands out.“They grew up around the communities in which they are working, they are intuitive and understand their demands, and they have developed programs that seize opportunities and help resolve local challenges,” Issroff says.

A Partnership with KBFUS

Both Gatere and Kamau decided to open an American friends fund with KBFUS, to channel donations from U.S. based donors seeking to support their organizations. For Gatere, Buildher was initially missing out on funding from U.S. donors. “With KBFUS, we now have a reliable partner to receive tax-deductible donations in the United States,” Gatere explains. “Without their support, we would be totally locked out of the U.S.”

Kamau reached out to KBFUS at the recommendation of one of AkiraChix’s funders. “AkiraChix’s partnership with KBFUS has been very helpful. It has been a seamless relationship which enabled us to draw on new funding partners for our portfolio,” Kamau says.