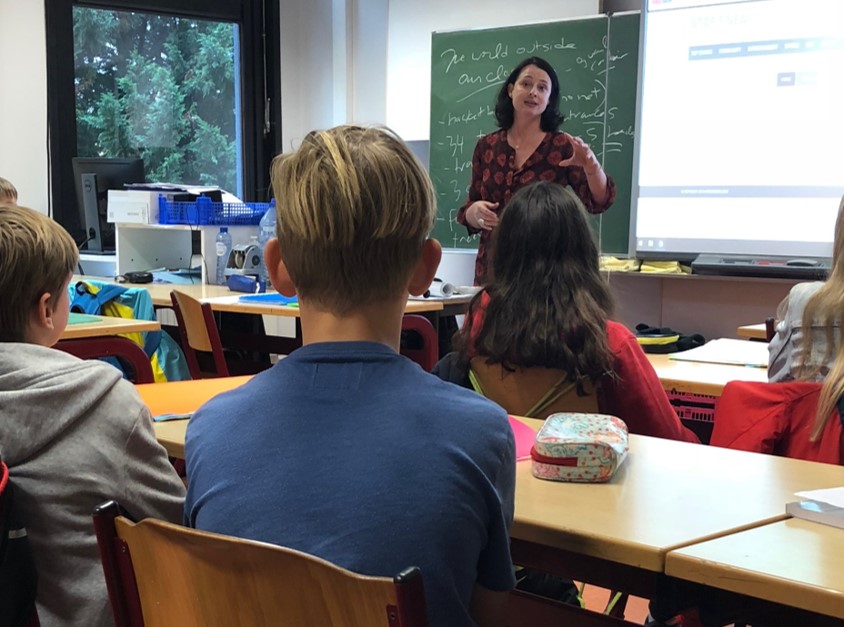 In an age of growing media distrust, claims of fake news and rampant spread of disinformation, Lie Detectors helps young people across Europe spot and resist the high volume of manipulative media crowding their social media feeds. Doing so, it aims to sharpen their critical thinking skills, enabling them to develop a well-informed world view, based on reliable information. These efforts are supported by the Wyss Foundation and its founder and chairman, Wyoming-based entrepreneur and philanthropist Hansjörg Wyss.

After various assignments in Brussels, Washington DC and London, reporting for outlets such as The Wall Street Journal, Newsweek, Reuters, MLex and Spiegel Online, longtime career journalist Juliane von Reppert-Bismarck moved to Brussels, Belgium with her husband and children in 2016.

It was around that time that she began to notice the erosion of trust in journalism. She distinctly recalls commenting on a close family member’s political Facebook post. He responded, “You know I love you dearly, but why should I trust you? You’re a journalist.” That retort hit home.

As an editor in the U.S., von Reppert-Bismarck had witnessed firsthand the shuttering of local newspapers in middle America. The closure of local newspapers was leaving large coastal media outlets as the singular news source for a nation increasingly divided by ideology.

The results of the 2016 Brexit referendum in the UK, followed by the U.S. election that same year added another layer of complexity, and further awakened journalists and the public to the far-reaching tide of disinformation.

A year later, von Reppert-Bismarck founded Lie Detectors, based in Brussels, Belgium, to promote news literacy and combat the spread of disinformation.

As a nonpartisan organization, Lie Detectors aims to give children the tools they need to differentiate between certainties, mistruths, and the shades of grey that lie in between. The goal is to help them make informed decisions, which ultimately secures our democracy. “We don’t tell children what to think. We tell them to think,” von Reppert-Bismarck explains. Students are encouraged to consume media with a critical eye and fact-check information.

Journalists volunteer to demystify their profession, explaining their work and its role in society, discussing journalistic standards – and also candidly sharing their missteps. “We want children and teachers to know that on one side, there’s disinformation, which is purposely put out there to manipulate the public’s thoughts. And then there’s professional journalism, which may not always get it right, but which has the intent to inform people. Understanding the difference between these two is critical,” says von Reppert-Bismarck.

Lie Detectors’ focus on school-age children is intentional. This demographic, von Reppert-Bismarck says, is one that relies heavily on social platforms as a news source, and these platforms can accelerate the spread of misinformation. Ten to 15-year-olds are a prime age group for the news literacy program, she explains, because it bookends two key development stages: Around 10 or 11, children grow out of using the internet just to play games, and they start using the digital space to seek out information. And at ages 14 and 15, they are settling into secondary school, create social groups, and that’s when they start forging their own opinions about the world.

“We don’t tell children what to think. We tell them to think.”

Journalists on the Front Lines

Today, Lie Detectors works across three countries, Germany, Austria and Belgium. Its work involves roughly 200 journalists from accredited news organizations, whom it carefully selects and trains, using scripts created with input from teachers and psychologists. Following their training, journalists are connected to teachers and sent into classrooms for 90-minute sessions about misinformation.

“We try to make this as interactive as possible because we don’t want to be coming and telling them our adult thoughts,” says von Reppert-Bismarck. When tasked with describing misinformation, for instance, students typically don’t refer to it using phrases like “fake news” or “propaganda.” Instead, students use terms like “clickbait,” a result of the younger generation’s focus on digital platforms and their experience in the online world.

“They understand that an awful lot of money can be made by putting sensationalist or attention-getting content online and that it can influence decisions. If you think about it, that’s actually what’s behind disinformation,” von Reppert-Bismarck says. “So it’s about getting students to understand that if they apply that lens to the news world, they can navigate it much more safely.”

Students also receive a basic journalistic checklist that helps them gauge whether a source is credible. Most, if not all of the examples shown to students come from newer social media platforms like WhatsApp, Snapchat, TikTok, Instagram, Twitch or Fortnite, which are popular with young people and more vulnerable to misinformation. Facebook and Twitter are far less popular with the youth.

The organization considers itself an advocate for digital literacy and critical thinking. “We call it lateral literacy — the ability to look left and right before seizing upon a fact,” she says. She advocates for digital literacy to become a fundamental competency that’s measured by school rankings and integrated into school curricula and teacher training curricula.

Von Reppert-Bismarck first tested out her campaign in a Brussels’ classroom in February 2017. Six months later, Lie Detectors officially launched, with the financial backing of Hansjörg Wyss and the Wyss Foundation. A native of Switzerland who now lives in Wyoming, Wyss attended Harvard Business School and later started a successful medical research and design company, headquartered in Pennsylvania. In 1998, he established the Wyss Foundation to encourage new solutions in areas from land conservation and education to economic opportunity and social justice.

“Young people have numerous sources of information right at their fingertips. Lie Detectors enables them to discern fact from fiction,” says Wyss.

Hansjörg Wyss’ generosity was received through the Friends of Lie Detectors, an ‘American friends fund’ established at KBFUS. An American friends fund provides European and African nonprofits with a cost-effective solution to receive tax-deductible gifts from U.S. donors, while saving them the trouble and expense of setting up their own 501(c)(3) public charity.

“KBFUS does all of the vetting upfront to make sure that our programs meet U.S. requirements for charitable contributions,” von Reppert-Bismarck says. “In addition, everybody has heard of the King Baudouin Foundation in Europe, so that partnership adds some credibility and gravitas, and that’s important when you’re a startup.”

“Young people have numerous sources of information right at their fingertips. Lie Detectors enables them to discern fact from fiction.”

In the Time of Coronavirus

While the pandemic has slowed Lie Detectors’ growth, momentum and interest in its work is surging. It has reached more than 18,000 children to date and is on track to meet its goal of visiting a total of 1,100 classrooms by year-end 2020. Like much of the world, the organization moved to an online format. Ten days after Europe initiated lockdown mandates in late March, Lie Detectors started mailing out Coronavirus-focused presentations to students, and later broadcasted journalists into classrooms via real-time video conferencing or prerecorded videos.

What the Future Holds

Over the next few years, von Reppert-Bismarck wants to double the number of countries where Lie Detectors has a presence, to include Poland, Switzerland and English speaking countries. She also has plans to strengthen its advisory work in the policy space, working with public authorities and with educational institutions, to address how to tackle media literacy and curtail the spread of fake news.

“Critical digital literacy is more important than ever. Ethical journalists check facts every day of their working lives and we have an important part to play in transmitting this skill in the medium term. But in the end this critical thinking is a skill that teachers should be able to relay in every classroom, across the world. If we can ignite the curiosity and questioning minds of children and their teachers, we are on the right path,” says von Reppert-Bismarck.