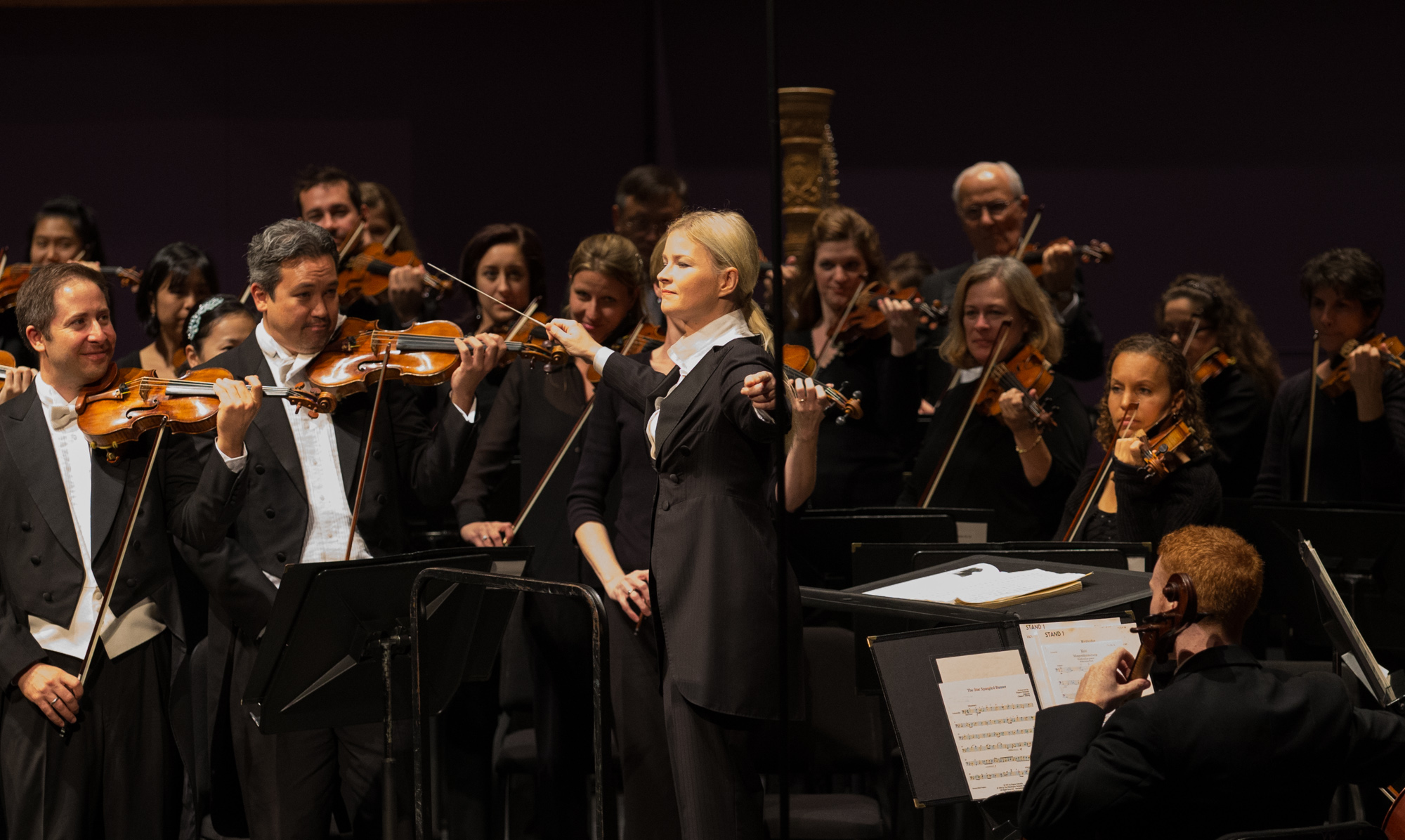 Award-winning television producer Ene Riisna’s love for music, for her parents and for her home country are inextricably linked. With her husband James Greenfield, a former editor at the New York Times, she established a legacy fund at KBFUS to support future generations of talented musicians and composers in Estonia.

Music has an enormous significance in Estonia for many reasons, says Ene Riisna. For one of the smallest countries in the world, Estonia has indeed produced a large number of musicians, performers and composers. Each county has had its own choir for centuries. During the Estonian Song Festival, held in the capital city Tallinn every four years since 1869, choirs from all over the country perform music in their folk costumes.

“Even during the Soviet occupation from 1944 to 1991, a 20,000-strong choir would sing Estonian folk songs and the country’s national anthem on a hill by the sea, with sometimes 200,000 people in the audience sitting on the grass,” says Riisna. “There was no way the Soviets could arrest 200,000 people.”

“Estonians kept their language, their music, their choirs. Music was the glue that helped hold the country together throughout the occupation,” adds Riisna. Ultimately, it was the ‘Singing Revolution’, with various protests and acts of defiance held over four years, which led to the restoration of the independence of the Baltic States -Estonia, Latvia and Lithuania- in 1991.

“Estonians kept their language, their music, their choirs.  Music was the glue that helped hold the country together throughout the Soviet occupation.”

It started with a beautiful life

“I was born in 1938 in Estonia, at the time practically a perfect world,” Riisna says. “My father Eduard was a lawyer and member of parliament. He played the violin, my mother Olga played the piano. Their closest friend Nadia Roose, who I call my aunt, was their audience. We had a country house on the sea, a beloved nanny, and a dog and a cat.”

That life changed in 1940, when the Soviets started their military occupation of Estonia, Latvia and Lithuania. Then, in 1941, Nazi Germany attacked the Soviet Union and invaded the Baltic States.

“The turmoil had started in the year I was born,” Riisna says. “But it really didn’t touch us too hard until my father was jailed by the Germans in 1944. They systematically swept up people who were educated, influential or wealthy. My father was active in the resistance and was warning Jewish families to leave. Many who the Germans had imprisoned were killed. But my mother befriended someone who helped get my father released from jail in late summer 1944.”

That was the year the Soviet Union recaptured most of the Baltic States. “My father got hold of several small seaworthy boats and started helping people out of the country,” Riisna says. “One day we got a message that the Soviets were looking for him. We took some friends and managed to escape.”

Her aunt Nadia Roose and some other friends and relatives stayed behind, because they believed the allies would soon free the country. “Of course, they were wrong,” Riisna says. “We steered our little boat through stormy waters towards Sweden. The engine failed and the boat was leaking. At the end, we were very lucky that the Swedish coast guard was out in international waters. They saved our lives. I was just six years old but I remember it very well. I can close my eyes and be back there. It’s a story of immigrants. It’s a story of refugees.”

New beginnings in Sweden – then forward to Canada

“The Swedes were incredible,” Riisna says. “They organized refugee camps, very good ones. Within 18 months they found work for my father, first as a logger and then at a bank. They got us an apartment and some basic furniture and housewares. I still have the kettle we used there. Swedish families took us into their homes for holidays. They were extraordinary.”

When Riisna was 13, her parents realized that they would not be able to return to Estonia, which was now behind the iron curtain. “They decided that we would have more of a chance of a better future in the United States,” she says. “But our application was turned down because of quotas. So we applied to Canada, and were accepted as we had a cousin in Toronto who was willing to sponsor us.”

Riisna’s experiences in her early life shaped her decisions to support philanthropic causes. “People have extended a hand to me all through my life. I know first-hand the big effect just a little bit of help can have. In Sweden people collected clothes and basic necessities for us. When I was in grade school there, one of my teachers helped me apply for a scholarship to a private school for high achievers. At the Canadian embassy in Stockholm, the Consul welcomed us and told me that I would grow up to be a good Canadian citizen. When I arrived in Canada, a teacher offered to meet me at the school in the morning an hour before classes to teach me English.”

“Those small acts of support made a big difference.  While they may not have made such a big impression on someone with a more stable life, I can truly say that I remember every single one of them.”

When Riisna finally went back to Estonia as a journalist in 1980, she reconnected with her early life. “I found my aunt Nadia, and she became my Estonian angel. She had survived years of Soviet occupation and deprivation with her spirit, optimism, and love of life intact. This year she turned 100. Nadia Roose was the last one of my family and their circle, my link to my Estonian past, the one who remembers our life. She was able to tell me what had happened to my grandmother, my relatives, our nanny, our friends. She took me to concerts in Tallinn, and she brought Anu and Kadri Tali into my life – twins who at age 26 founded their own orchestra in Estonia.”

“My husband Jim and I have no children,” Riisna says. “We have a trust that will give away money at the end of our lives to several causes, including to the Nordic Symphony Orchestra that Anu and Kadri Tali have made into a success.”

The Nordic Symphony Orchestra brings together musicians from the world’s leading orchestras and presents the best of classical repertoire as well as contemporary and less well-known music, with special attention to Estonian, Scandinavian and Russian composers.

While the orchestra does extraordinary work, it was in a difficult financial position in 2008, when the government was forced to withdraw funding for the arts due to the global financial crisis. That is when Riisna and her husband began supporting its activities with small gifts and fundraising.

“I wanted to honor the three of them – my parents and my Aunt Nadia – because they brought joy and music into my life.”

A fund named with love – a lasting commitment to future generations

Soon thereafter, they began to explore how they could make a more lasting gift to the orchestra, and stimulate new generations of talented musicians and composers in Estonia. “Jim and I discovered that it’s not simple to give money away internationally,” she says. “We consulted with lawyers in Estonia and the United States. We went through a lot of different permutations over several years. And then our estate planner recommended working with KBFUS.”

KBFUS makes it easy for donors to establish a legacy fund that will make gifts in their name, forever or for a specific number of years, to support the causes they cherish or the organizations they love, anywhere in Europe or Africa.

“I met with their team in New York and was very impressed. It immediately became clear to me that we had finally found a home for our gifts to Estonia. KBFUS is the only organization we found that will be able to fulfil our wishes, and manage and protect the money we are leaving. I decided to open a legacy fund with them, to be funded through a charitable bequest. KBFUS will work with Anu and Kadri Tali -who are great mentors to young musicians- to distribute fellowships to talented young musicians and composers in Estonia, giving them the opportunity to receive training and to debut in their orchestra.”

The ‘Eduard and Olga Riisna – Nadia Roose Fund for Excellence in Music’ was named for Riisna’s parents, who met as musicians, and for her aunt Nadia. “I wanted to honor the three of them because they brought joy and music into my life,” concludes Riisna.

Ene Riisna earned an honors degree in English Language and Literature from the University of Toronto, University College. She briefly worked as a fashion model, lived in Italy and England, was a producer-director for Canadian Broadcasting Corporation in Toronto, and a freelancer for the BBC in London.

She broke into network television in America in 1970, when she was hired as executive producer of the new morning program Woman for CBS in New York. Later, she produced documentaries for NBC and PBS, and wrote for magazines. She was active in the New York feminist movement in the 1970s, working to elect women candidates to political office.

Riisna was a top producer of 20/20 at ABC News, a program she helped create, and remained one of its leading producers for 23 years until she retired in 2001. She is the recipient of more than a dozen major awards, including two Emmys, a Television Academy General Achievement Award, and Columbia School of Journalism’s prestigious Dupont Award.

At the age of 60, she married James Lloyd Greenfield. Greenfield served as United States Assistant Secretary of State for Public Affairs from 1964 to 1966. He later worked at The New York Times for 30 years – as a foreign news editor, assistant managing editor, editor of The New York Times Magazine, and member of the editorial board. In 1971, he was one of the editors who decided to publish the Pentagon Papers, for which The Times won a Pulitzer Prize. Greenfield is a founder of the Independent Journalism Foundation, which promotes free and independent media in Eastern and Central Europe and Southeast Asia.

The King Baudouin Foundation United States (KBFUS) is the leading resource for philanthropic giving to Europe and Africa – a trusted advisor for U.S. donors seeking to support their favorite causes and non-profits overseas. To learn more about our donor-advised funds, legacy funds and KBFUS ART, please visit kbfus.org.
Or contact us at (212) 713-7660 or [email protected]