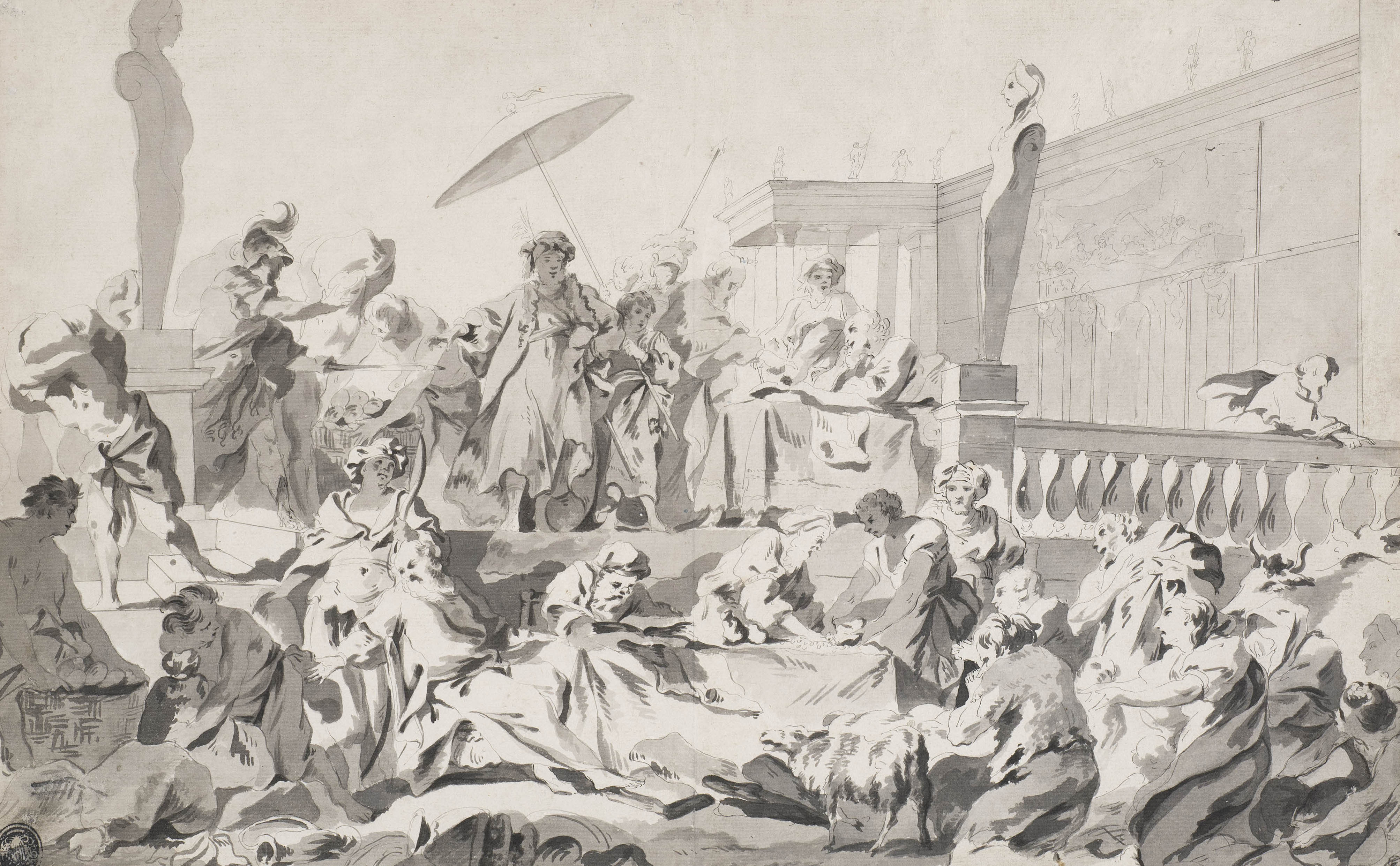 Private investor and art collector Jeffrey Horvitz began acquiring 18th-century French drawings, paintings and sculptures in the 1980s. After three decades of careful purchases, The Horvitz Collection is recognized as the most important private collection of French drawings outside of Europe. Over the past two years, Horvitz donated four artworks to KBFUS. They can now be admired at the Petit Palais in Paris.

Jeffrey Horvitz’s love for all things French began in 1964 during a seminal trip to France with his grandmother and a cousin.

“I was 14 years old and had never been outside of the United States, except for one trip to the Caribbean,” says Horvitz. “So going to Europe was a big deal. It was a five-week excursion and we went to most of the major capitals.”

It was only about 20 years after World War II and Europe was still rebuilding. Horvitz recalls that the exteriors of many buildings in Paris were black, degraded from the ravages of time and war.

“But Europe was still inexpensive for Americans, who were fairly wealthy relative to post-war Europeans,” he adds. “So it was a somewhat glamorous holiday because we were able to stay in beautiful hotels and eat in good restaurants. It was really quite a life-changing experience for someone who lived in a suburb of Cleveland. All the cities were interesting. Paris eventually became the center of my attention, but that came a bit later.”

A thoughtful decision to collect

In the mid-1970s, while Horvitz was working on his second graduate degree at UCLA, he began selling inexpensive prints to make some extra money. His venture quickly turned into a fulltime business. Soon, the pull of art was stronger than his studies. “I decided to not finish my dissertation and instead to become a fulltime dealer in 20th-century and contemporary art.”

Horvitz travelled to New York, London and Paris in his quest to obtain quality pieces, selling to dealers all over the United States. In 1980, he moved from Los Angeles to Florida to participate more closely in his family’s real estate business. He tried keeping up with his art dealer activities on the side, but no longer found it satisfying. Around 1983, he decided to start a collection of his own.

“I asked around and I eliminated a lot of areas,” Horvitz says. “Tribal arts had too many works that were fake and Asian art was not really my aesthetic. What could I collect that was similar to my dealing area but not the same? The answer was Old Masters. Drawings were less expensive and fairly abundant, so that is how my collection began, with a focus on French and Italian works.”

“We may have legal title when we buy it, but in a moral sense, we are only stewards of the art we acquire.”

In the late 1980s, Horvitz says, several factors determined his course to concentrate solely on French drawings. One of those factors was the Getty Museum in Los Angeles, which had a very large acquisitions budget at the time. The curator was building up its Italian drawing collection, and because of that interest, prices were driven up dramatically.

“But French drawings were still affordable, and it turned out that I was more interested in that aesthetic. So my French collection grew much faster than the Italian.”

In 1993, Horvitz hired art historian Alvin L. Clark Jr. “I needed someone who could understand what they were seeing,” he says. “I taught him about the art market and he taught me about art history. We developed a functional partnership in building this collection, which expanded from drawings to paintings to sculpture.”

Clark recently retired from his position as Research Curator at the Harvard Art Museums and is now the Curator of the Horvitz Collection, which includes approximately 1600 drawings, 180 paintings and 36 sculptures, all French.

In the mid-1990s, at the urging of his wife, Carol, the Horvitzes also started to collect Chinese cinnabar lacquer and later, after deaccessioning the collection of Italian old master drawings in 2008, they began forming a third major collection of Japanese contemporary ceramics. Both Asian collections are managed by Carol, with the same passion and discipline as the French collection.

A major showing in Paris

A few years ago, Clark and Christophe Leribault, Director of the Petit Palais in Paris, began discussions to collaborate on a major exhibition of the French collection. Initially built for the 1900 Exposition Universelle, the Petit Palais became the Museum of Fine Arts of the City of Paris.

“Christophe had visited our house several times and was reasonably familiar with the collection,” Horvitz says. “He was interested in doing something with us and this grand project eventually took shape. Being able to show a portion of what an American collector with a love for 18th-century French art can assemble, and to present it in what had been (before Leribault) a somewhat underappreciated cultural institution in Paris, made the decision quite logical and fulfilling.”

Following the Paris exhibition, Horvitz generously donated three drawings and a painting to KBFUS, all carefully chosen, with the recommendation that the works first be loaned to the Petit Palais, and later be given to the museum.

“My wife Carol and I share the view that we have a duty to share our collection with the public, through exhibitions and giving. We may have legal title when we buy it, but in a moral sense, we are only stewards of the art we acquire. If well-taken care of, the artworks will survive us. So we have an obligation to do right by it.”

Horvitz shares an analogy based on the saying ‘If a tree falls in the forest and no one hears it, does it make a sound?’. “If art is unseen, is it still art? My wife and I believe that unseen art is not art. It needs a viewer to be fulfilled. And so we are very open to lending to exhibitions, to hosting scholars and museum groups. As much as we can, we provide a reasonable amount of exposure.”

“My wife and I believe that unseen art is not art.
It needs a viewer to be fulfilled.”

Balancing gifts at home and abroad

Horvitz says that while he believes it’s important for U.S. philanthropists to gift art to American museums, there are also times when overseas donations make sense. “Often it’s clear that a specific museum is the right home for a specific piece. And since we tend to see art as international anyway, I am not particularly concerned if it’s in the U.S. or elsewhere.”

“One of the things that interest us is providing art to the newer and smaller museums because huge, encyclopedic museums can only display a fraction of what they have. But for some of the smaller museums in smaller centers, having a new piece can make a bigger difference,” says Horvitz.

A couple of years ago, KBFUS launched KBFUS ART to help U.S. donors navigate the cultural, legal and tax complexities involved in donating art overseas. “KBFUS is a very straightforward and professional organization,” says Horvitz. “There are very few U.S. public charities that accept donations of artworks for the benefit of international museums. KBFUS is particularly helpful, easy to work with, and totally reliable.”