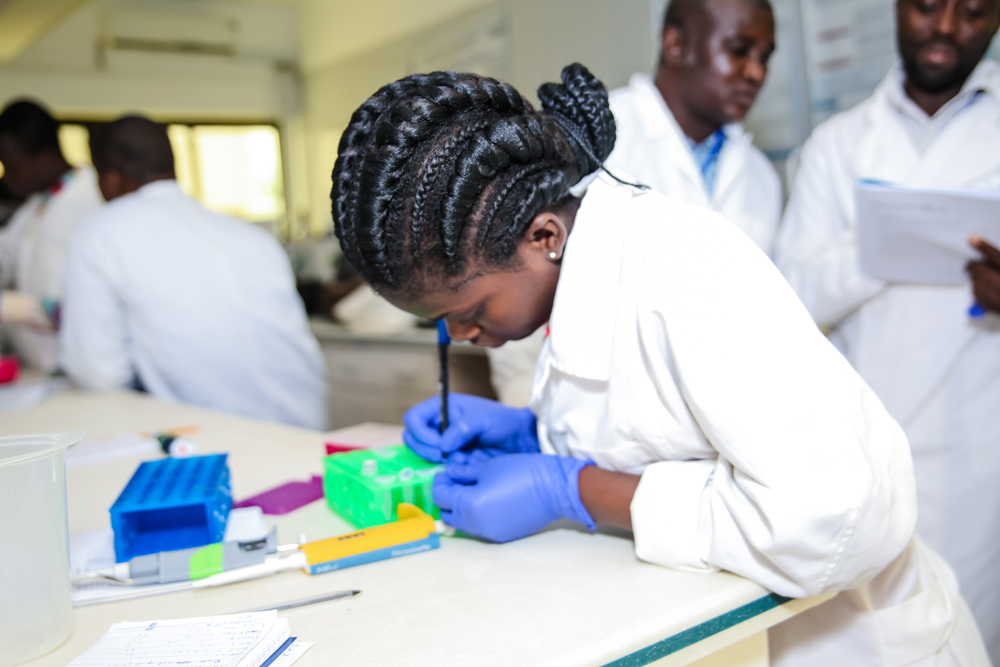 The African Academy of Sciences (Kenya) and the Africa Research Excellence Fund (Gambia)  have recently opened American friends funds at KBFUS to enable U.S. supporters to contribute to their important work. Focused on research and scientific inquiry, the two organizations share the goal of attracting, cultivating and nurturing home-grown talent in Africa, for the benefit of the continent and the world.

The African Academy of Sciences

Based in Kenya, the African Academy of Sciences (AAS) is a pan-African community of scientists who aim to drive sustainable development in Africa through science, technology and innovation.

“The vision of the academy is to see transformed lives through science in Africa,” says Dr. Isayvani Naicker, Director for Strategy & Partnerships at AAS. “We have a tripartite mandate. One is pursuing excellence by recognizing and developing leading scholars in science and research through prestigious fellowship and award schemes. The second is to provide advice to governments and policy makers as they develop the continent’s science, technology and innovation research properties, strategies and policies. And third, we implement science, technology and innovation programs that tackle the developmental challenges that Africa faces.”

“We achieve our mandate by forming strategic partnerships both on the continent and around the world,” Naicker says. “We are currently funded primarily through global philanthropy, including the Wellcome Trust, the Bill & Melinda Gates Foundation, and the UK Department for International Development (DFID). We initially also got an endowment from the government of Nigeria to support our work.”

Naicker says that while many African governments do invest in science, technology and innovation, they do not spend enough. “There was a commitment by African governments to spend one per cent of GDP on investment in science, but unfortunately not many have achieved this. So what we as a pan-African institution do is to see where there is a need. And by launching calls for proposals across the continent, we are trying to address this lack of funding where it exists. We work with a variety of partners and international supporters, and then disperse funds where they are needed most.”

But it’s not just about deploying the money, she adds. “It’s also very much about identifying where excellent science is being done and not only offering financial backing but also looking at what other kinds of support is required. For example, we recently launched the Research Management Program in Africa, which seeks to enhance the ecosystems for research and development on the continent to ensure that our scientists are working in environments that enable them to achieve their full potential. We support the institutions where our scientists work to build and manage the research infrastructure and environment.”

There is a need to develop the human capacity.  “We also have an Affiliates Program to support younger scientists in their post-doctoral phase who are on their way to becoming independent researchers and require mentorship, networking and collaboration opportunities, or support to communicate their research.”

Naicker says that partnering with KBFUS was a way to reach a wider audience of friends who may want to support the work of AAS.

“We recognize that there are a lot of family foundations and individuals in America who are either African diaspora or have worked in Africa and who recognize the importance of investing in science, technology and innovation on the continent,” she says. “Many people who understand the challenges Africa faces want to help tackle them but perhaps don’t know how. The AAS American Friends Fund is a way for people to make a meaningful contribution and be sure it is being put to good use.”

“My goal is to make sure we have competent African scientists who are committed to research in Africa.”

Established in 2015, the Africa Research Excellence Fund (AREF) is a linked charity of the Medical Research Foundation (UK). AREF’s aim is to nurture  the next generations of medical and health researchers to reach their full scientific leadership potential, to improve health and save lives in Africa for Africa and globally.

Professor Tumani Corrah CBE, Founder and Director of AREF, says this young, dynamic, African-led charity supports emerging scientists on the continent. “AREF enables them to develop the skills, networks and capabilities they need to plan, manage and implement world-class research,” he says. “We also help them learn to attract the levels of competitive international funding and collaboration they will need to ensure their continued professional growth, success and impact.”

Corrah worked as a science researcher in the Gambia for 30 years with the Medical Research Council, an organization he also led for 12 years.

“Throughout my career I was privileged to work with various grant-making bodies. Serving on these committees, I observed how some of the Africans would have benefitted from further training. I could see that they were bright, young scientists but that they lacked certain planning and management skills to succeed. So these committed young scientists were often not able to compete with candidates from world-class universities to win international funds.”

To help address this gap and strengthen health research capacity, Corrah launched AREF in 2015. “My goal is to make sure we have competent African scientists who are committed to research in Africa and who can partner with global scientists to solve global problems. AREF is trying to make a contribution towards making this a possibility and ensure that Africans define Africa’s health research agenda.”

AREF’s Academy Program provides training, such as essential grant-writing skills (workshop) and a newly launched Excell leadership development program. And its Awards Program provides grants to emerging researchers to develop an original research idea into a project for which they can win competitive funding. Both initiatives have been hugely successful so far.

“One bright example is a young woman from Uganda who approached us after the grant-writing training and said, ‘Now I know exactly how to win grants.’ So we said to her ‘Go ahead. Prove yourself.’ Six months later she won a DFID grant of GBP 500,000, followed by another GBP 500,000 from Comic Relief six months later. To date she has received GBP 1.2 million in grants.”

In addition, AREF’s Research Development Fellowships give researchers financial support to work for three to nine months in a world-class institution in Africa or Europe. “These opportunities give young scientists access to workshops, lectures, tutorials,” Corrah says. “They can develop networks, receive fantastic mentoring and learn important communication skills. This is one area that we are extremely proud of.”

“The vision of the academy is to see transformed lives through science in Africa.”

AREF joined with KBFUS to open the Friends of the Africa Research Excellence Fund to help Africa’s most talented health scientists achieve their full potential – in Africa, for Africa.

“There are quite a lot of people of African descent in the United States and there are also a lot of other funding opportunities there,” Corrah says. “KBFUS provides us with a platform to raise awareness about our work and to receive tax-deductible contributions from donors based in the U.S.”

“People have to see what you deliver before they make commitments to support you,” he says. “AREF is only four years old. But we have already received substantial support from international funders and our fellows are finding great success in their work. We are just entering the American market and we have received good responses from people so far.”

Corrah is optimistic that as the foundation’s work becomes better known in the U.S., more Americans and people living in America will want to support it. “Little drops of water make a mighty ocean.”

The Art & Science of Fundraising

Each year, KBFUS organizes two intensive study visits on the Art & Science of Fundraising, to introduce African and European universities and other leading nonprofits to successful development strategies. During four days of discussions with some of New York City’s most talented fundraising professionals, participants explore creative solutions to broaden their funding.

Dr. Naicker, who attended the 2019 session, said she was surprised about the amount of time and energy American institutions invest in fundraising. “The most important takeaway for me was that developing relationships is key,” she adds. “People give to people, not to organizations. How you talk to people is important. You have to find out what potential donors want, and show them how your work matches their interests. You have to spend the time developing those personal connections.”

Prof. Corrah, who attended the 2017 session, concurs. “I learned the importance of having a committed board of trustees,” he says. “They should be willing to spread good news about the organization, share their networks, open doors and introduce you to people.”

The African Academy of Sciences