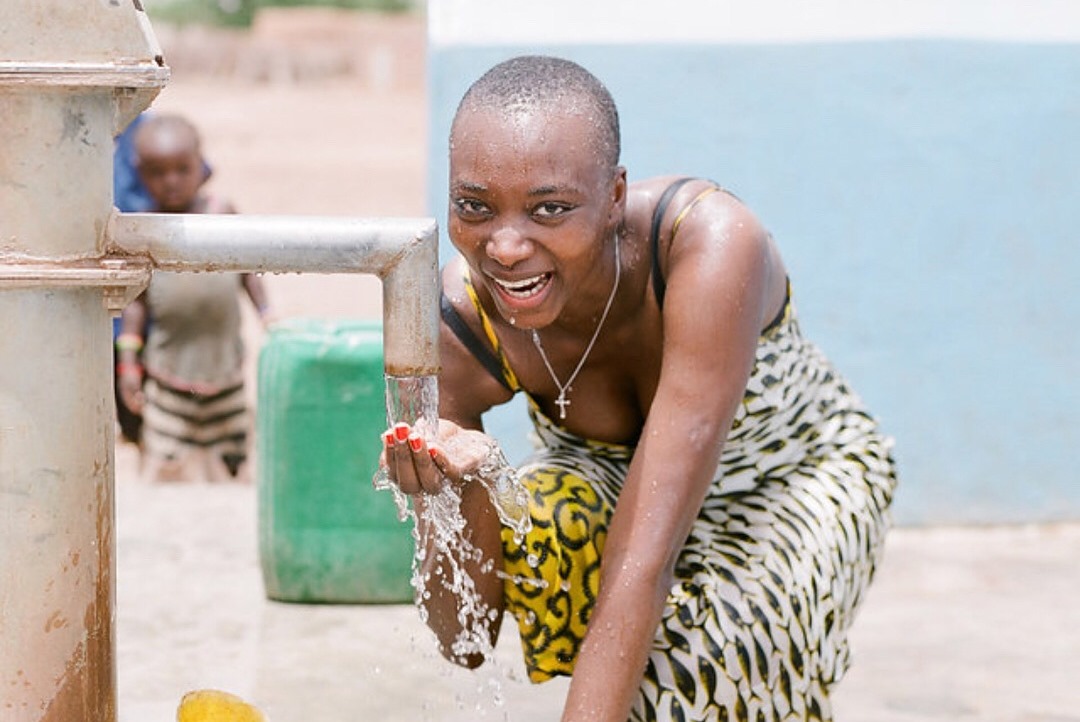 Georgie Badiel of Burkina Faso and Toni Garrn of Germany are two inspirational young women on similar missions. After finding international success as fashion models, they decided to give back to those who didn’t have the opportunities they had. Through educational programs, health and sanitation initiatives, and environmental projects, they lift up women and girls and their communities in Africa.

Georgie Badiel-Liberty is a Burkinabé model who lives and works in New York City. She is also an activist who has taken on the issue of lack of safe water and sanitation in her West African homeland. Her two children’s books, The Water Princess, which is based on her childhood experiences, and Princess GieGie, Water is Here tells the story of a young girl who brings clean water to her community.

“As a child, I used to walk three hours every day with my grandmother to fetch water,” she says.

After winning Miss Burkina Faso in 2003 and Miss Africa in 2004, a modelling contract took her to Paris, London, Milan and New York.

“In 2016, I went back home to visit my sister and found that she woke up between 2:00 and 4:00 in the morning to get water. I couldn’t believe that women still had to go through that. I was so sad about it that I decided to make a difference, and started my foundation.”

Since then, the Georgie Badiel Foundation has built and restored water wells, provided women with technical training in well operation and maintenance, educated students about sanitary and hygiene practices, installed toilets in schools, and planted trees to reduce water runoff.

In 2017, these initiatives were supported with a $30,000 grant from the Bike for Africa donor-advised fund, which was established at KBFUS by Brussels Airlines and its b.foundation.

One of the stories that touched Badiel deeply is that of a woman named Noel, who lives in Nabisanrgo-Mossi, a village of over 1550 people in Burkina Faso.

“I met Noel when she was eight months pregnant,” she says. “She had to walk every day to fetch water from a polluted creek. She asked me if I could get clean water for her and her family. She said ‘I have a sick child. I am giving birth soon. My family’s future depends on clean water.’”

With the money received from Bike for Africa, Badiel’s foundation built a well in her village. “Now, Noel knows that there is hope, that tomorrow she will see her children grow up healthy and happy. She no longer worries that they will not survive because of a lack of clean water.” With the funds raised by Bike for Africa, Badiel’s foundation has restored twenty broken wells and trained women to maintain them.

This year Badiel plans to work with local women to plant a large garden near the well so they can grow their own food, which will help alleviate hunger. “There are so many spinoffs from the well,” Badiel says. “Less disease, better health, more food.”

“There are so many spin-offs from the well.
Less disease, better health, more food.”

In addition to drilling water wells, the foundation also teaches village women how to repair broken wells. “Many organizations have built wells but they don’t educate people on maintenance and repair. We have to empower women to take care of that. Fetching water is a women’s duty. A broken well is a women’s problem. And women’s problems can be solved only by women.”

The 50 women selected so far to repair wells travelled to the capital city of Ouagadougou to learn basic engineering in their own dialects. “Women will hear the well in the next village is broken, and they will repair it without asking for a penny. They know the struggle other women are going through.”

Besides the 13 new wells and the 84 they have restored, the Georgie Badiel Foundation has also installed toilets in schools. Their goal is to eventually ensure there are proper sanitation facilities to accompany each well they build. “When girls have their periods, they do not go to school if there are no toilets, so this is another important goal for us,” she says.

Toni Garrn is a German-born model who got her big break in the fashion industry after signing an exclusive contract with Calvin Klein at age 15. Today, Garrn divides her time between New York and Berlin.

In 2014, at just 22 years old, she became an ambassador for Plan International’s global campaign ‘Because I am a Girl’, which promotes the rights of girls around the world. “Working with Plan woke up the philanthropist in me,” she says. “I learned so much working with them. Visiting villages and just listening helped me really understand the challenges.”

In 2016, she established the Toni Garrn Foundation, which raises money and invests in local organizations to promote the development of girls and their communities in Ghana, Burundi, Rwanda and Zimbabwe. Her foundation provides an effective way for donors to support some of the smaller, more focused projects that she cares about, like a school or a health center.

“I started travelling to Africa with my family when I was quite young and I fell in love with the continent,” she says. “I realized that I couldn’t just continue going there on vacation without giving something back. That’s where my initial inspiration to help came from.”

“I am in one of the rare professions in the world where women are more successful than men.  I really want to help girls who haven’t had the opportunities I did to get ahead.”

“All the projects I support are focused around education, for a couple of reasons,” she says. “First, when I started coming to Africa I was shocked to see so many girls not in school. They were barefoot and carrying water all day. And I rarely saw boys do that. The boys were either running around playing or in school, while the girls stayed home and did household chores.”

“Another reason is that I am in one of the only professions in the world where women are more successful than men. I realized that I am lucky in that regard. I really wanted to help girls who didn’t have the opportunities I did to get ahead.”

Garrn says that all the girls she meets tell her the number one thing they want is education. “They want to be able to go to school. They want scholarships, they want their school fees paid, they want school uniforms, and they want some light at night to study. That’s all they talk about. These girls are so driven and passionate, and that’s what inspires me.”

Besides helping girls get a formal education, Garrn has run several ‘girls empowerment camps,’ which is a safe place for them to get together for a few days and talk about practical matters like self-esteem, domestic violence and family planning.

“The girls love it so much. It’s a cultural exchange, a place to get away from household chores, to talk, to play games, to dance. The girls who attend go home and talk to others in their villages about what they’ve learned.”

Garrn decided to partner with KBFUS in 2018 and opened the Toni Garrn Foundation US Fund. KBFUS makes it easy for American donors to make contributions to her foundation, which is based in Germany.

“Americans can’t donate to foreign NGOs and get a tax deduction so we needed a U.S. partner. We did some research and found KBFUS. They were highly recommended. It is very rewarding to work with them.”

The Toni Garrn Foundation US Fund is currently raising funds for a girl’s dormitory and school bus in Ghana and for a women’s health pavilion on a hospital campus in Burundi.

Her ultimate goal is to change as many girls’ lives as possible. “I would love to hold at least one camp a year in different countries in Africa,” she says. “I really feel I am doing so much good there.”