The Egyptian diaspora is eager to give back: A conversation with Tarek & Nahed Hallaba 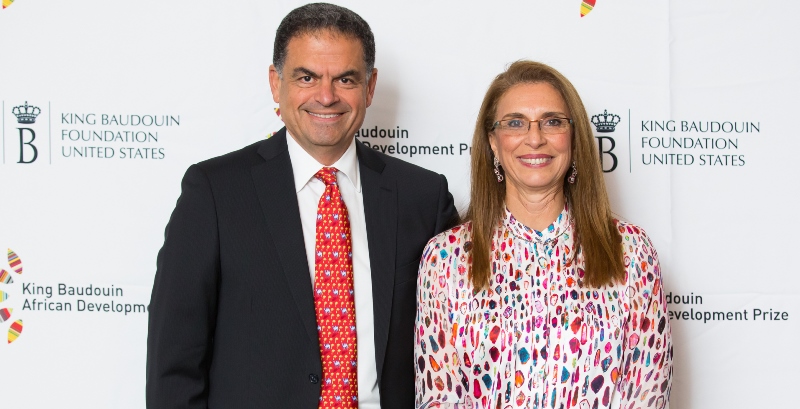 Why do people give back to their countries of origin after moving to the United States?
For philanthropists Tarek and Nahed Hallaba, a deep empathy for those who suffer illness, a family tragedy, and a life-saving operation for a friend’s child sparked a passion for supporting medical causes in their native Egypt.

Born in Alexandria and raised in Cairo until the age of 11, Tarek Hallaba moved with his parents to Geneva for two years, and then to Kansas at age 13 following an invitation from his uncle, a doctor who had settled in Kansas many years prior. Hallaba had planned to follow in his uncle’s footsteps, eventually studying pre-med in South Carolina, where he and his family moved when he was 17.

“But once I started going into hospitals I realized that I did not like the environment,” he says. “I wasn’t comfortable around sick people. I just couldn’t bear to see people suffer.”

Hallaba, who speaks English, French and Arabic, decided to switch career tracks and got an MBA in International Finance at the University of South Carolina. “I thought that my ability to speak several languages would be a plus in the business world,” he says. “Right out of my MBA program I got a job with Colgate-Palmolive.”

He spent 28 years with the company – working around the world, in Egypt, Ivory Coast, New Zealand, France and Poland – and gradually moved through the ranks to become President of Colgate-Palmolive Global Personal Care. During his early career he married his Egyptian-born wife Nahed, and they continued the journey together, raising three sons and eventually settling in Connecticut. Today the couple splits their time between their home in Greenwich and their two residences in Egypt.

Hallaba’s parents divorced when he was three years old, and they both remarried. His mother had another son, a half-brother four years younger than Hallaba, to whom he was very close.

“He had a successful career with IBM,” says Hallaba. “One day on a trip to Japan, he passed away in an airport from an undiagnosed heart problem. That was a real shock. He was just 41 years old. It made me start thinking about life differently.”

Hallaba’s brother left some money to his mother in his will. “My mother never recovered from losing him. She was so distraught by his death that she passed away a couple of years later.” The inheritance was then passed on to Hallaba.

“I felt very strongly about honoring my brother and my mother with that money,” Hallaba says. “I decided to use it to do something in my brother’s memory, because that’s what my mother would have wanted. That double tragedy really got me thinking about helping others.”

“I decided to do something in my brother’s memory, because that’s what my mother would have wanted.  That double tragedy really got me thinking about helping others.”

A few years later, the family moved to Belgium, where Hallaba served as President, EMEA region for Georgia Pacific. That is where he learned from an Egyptian friend that his brother’s young son had a major heart problem.

“Thankfully, they went to the Aswan Heart Center, where they have excellent doctors,” says Hallaba. “Those doctors saved the boy’s life. I was very moved by the whole story. It was really inspiring.”

The Aswan Heart Center is a project of the Magdi Yacoub Heart Foundation, founded by Egyptian-British cardiothoracic surgeon Sir Magdi Yacoub. It provides free world-class medical services in the field of cardiovascular diseases to underprivileged people in Egypt and throughout the wider region.

On one of their trips to Egypt, the Hallabas met with the head of the Magdi Yacoub Heart Foundation to talk about the best way they could support the hospital and its charitable work.

“I told them that we preferred making a contribution through a U.S. public charity, so that our gift would qualify for a U.S. tax deduction, enabling us to be more generous.” The Magdi Yacoub Heart Foundation told the Hallabas that they were considering establishing an organization in the United States, but it seemed like a lengthy and complicated process.

“We waited three, four months, and we became frustrated with the delays,” Hallaba says. “That’s when I decided to help them open an American friends fund with KBFUS. We had learned about KBFUS’ work through their parent foundation during our time in Belgium, when Nahed was involved with a local group that was supporting vulnerable children in Egypt.”

The American Friends of Magdi Yacoub Heart Foundation was established in 2013. It provides the foundation with a cost-effective solution to receive tax-deductible gifts from U.S. donors. “We were the first contributors to the fund,” Hallaba says. “Since then, they have been increasingly successful at collecting other contributions in the United States, mainly from the Egyptian diaspora.”

In 2017, the Hallabas also wanted to support the Ibrahim A. Badran Charitable Foundation. Through monthly medical convoys, fully equipped with tools, medications and highly trained doctors from over 17 specialties, this innovative non-profit organization provides free medical services to people living in rural areas of Egypt.

“We were inspired by the story of the Badran Foundation – it is named after a talented young doctor who passed away in 2014 after a terrible car accident, while heading back home from a 48-hour shift at the hospital,” says Hallaba. “Here again, we worked with KBFUS to establish the Friends of the Ibrahim A. Badran Charitable Foundation. KBFUS’ team is extremely professional and dedicated to their mission. That is always reassuring. It’s a true pleasure working with them.”

“The Egyptian diaspora in the United States is eager to support charitable causes in their home country.  Their biggest challenge is just being informed.”

Egyptian Diaspora is eager to give back

Over the past five years, the Hallabas have contributed a generous $250,000 to KBFUS, to support various medical and healthcare initiatives in their native Egypt.

“The Egyptian diaspora in the United States is eager to support charitable causes in their home country. Their biggest challenge is just being informed of what is available,” Hallaba says.

“We need to let them know what opportunities there are. And we need to tell them that through organizations like KBFUS, they can make tax-efficient donations to support local charities in Egypt. While most Egyptians here are not necessarily wealthy, they have families back home, and they have a strong desire and sense of obligation to help out, especially given the struggling economy there. They need to know how to contribute in a way that makes financial and practical sense. This is the challenge.”