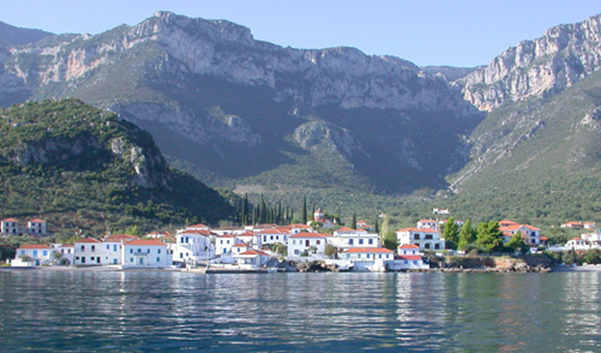 Tony Julius left his tiny, isolated village of Kyparissi, Greece, at the beginning of the 20th century, seeking a better future in the United States.  But he never forgot his roots.  Today, through a legacy fund managed by KBFUS, his memory lives on, making life better for the residents of Kyparissi and helping to put the village on the world map.

Backed by the craggy slopes of Mount Parnon and fronted by the cobalt blue Myrtoan Sea on the northeast coast of Greece, Kyparissi is a secluded seaside village of breathtaking beauty. The small community of just 400 residents relies on farming and fishing, olive oil production, beekeeping and summer tourism.

Until the 1970s, Kyparissi was accessible only by sea or by foot down a steep mountain path. Today, there is just one very dangerous dirt road that winds treacherously around cliffs and through ravines to connect the village with the nearest town of Molai, about one hour away.

This was where Tony Julius was born and raised. Although he lived in California for most of his adult life, he loved his home village so much that he decided to leave the majority of his estate to a legacy fund that would support Kyparissi in perpetuity.

The Tony Julius Fund, which has been managed as a KBFUS legacy fund since 2011, has an endowment of just over US$550,000. The annual revenue supports initiatives benefiting Kyparissi residents.

“There is a long tradition of benefactors like Tony Julius who left Kyparissi, made good lives in the United States, and continued to support their families back home.”

To ensure that funds go where they are needed most, KBFUS partnered with the Bodossaki Foundation, one of Greece’s most respected foundations and a member of the European Foundation Centre.

“In 2011, KBFUS was searching for a partner in Greece specialized in designing and implementing charitable initiatives,” says Sotiris Laganopoulos, Secretary of the Bodossaki Foundation. “We agreed to act as a broker and a grantee, and to help KBFUS disburse funds in line with the wishes of the late Tony Julius.”

“Our community contacts are people who interact daily with Kyparissi residents and have a clear and ongoing view of the basic needs that are required to maintain and improve living standards,” says Laganopoulos.

“They identify initiatives and make proposals to our foundation. Our team carefully researches and compares all proposals before deciding which ones to support with the revenue of the Tony Julius Fund. We believe it is also important to visit Kyparissi to develop a first-hand understanding of the village’s needs. So our team occasionally travels to Kyparissi and meets the residents and local representatives. All approved projects engage the services of small businesses, thus contributing to local employment.”

Since 2011, projects have included supporting the village’s needy individuals as well as maintaining and developing public infrastructure such as the church, the school, the doctor’s office, the water supply system and tourist hiking and rock climbing trails.

A school with a story

With one small primary school, and no high school, most people with children go to Athens for the winter, although some stay year-round. But the school was in desperate need of upgrades for the children who attend.

“We provided the school with basics like a computer, and even curtains for the windows,” Laganopoulos says. “We renovated the lavatories and the room with the heating system, where the leaky roof was letting in water.”

The school itself has an interesting history, he adds. It was built by Ernst Moritz Theodor Ziller, a German architect who became a Greek national. In the late 19th and early 20th centuries, he was famous across Europe for designing royal and municipal buildings.

“Some wealthy Americans who originated from Kyparissi donated money to have Ziller design the school,” says Laganopoulos. “It’s interesting to see one of his buildings in an isolated village in the middle of nowhere. There is a long tradition of benefactors like Tony Julius who left Kyparissi, made good lives in the United States and continued to support their families back home.”

“We pay great attention to the principles of transparency and integrity, and I believe this has inspired both foundation s to create maximum impact with the Tony Julius Fund.”

Despite the small population, the village has about a dozen small hotels. Princess Diana visited before her death. George H.W. Bush, the 41st President of the United States, has also holidayed there.

“A lot of people who used to live in Kyparissi come back for the summer,” Laganopoulos says. “It is also a popular tourist destination, known for its beautiful beaches and unparalleled rock climbing routes. It is considered to be one of the top climbing destinations in the world.”

Recently, the Fund has supported the upgrading of climbing routes around the village through the Kyparissi Bolting Project.

“I would say that one of the most important initiatives the Fund has supported was the drilling of 80 climbing routes in the mountain peaks around Kyparissi,” says Laganopoulos.

“People come from all over the world to climb the cliffs. Through the project we were able to develop new climbing routes in the village and its wider region. This paved the way for the first Climbing Festival in October 2015, which was very well received by the local community and visitors. In addition, the French National Climbing team stayed in Kyparissi in Autumn 2016 for about two weeks.”

Thanks to the new routes, the tourism period has been extended, running from April through November.

“This means that local people have jobs and income from tourists up to seven months a year, which is very important for the village,” Laganopoulos says. “Now there are not enough hotels to accommodate all the visitors and many people are being hosted in private homes.”

All initiatives aim to help the Kyparissi community either at an individual or a group level.

For example, the mother of one resident with severe physical and intellectual disabilities received support to help cover part of the cost of dental treatment and services at the Institution for Children with Special Needs. The Fund also helped pay for dialysis treatment for another low-income resident who suffers from kidney disease.

Healthcare is a huge challenge in Kyparissi. The village does not have a permanent doctor and the nearest hospital is more than one hour’s drive away in Molai.

“We did some repairs to the doctor’s office and covered the rent of an apartment so a visiting doctor could stay for several days a month,” says Laganopoulos.

“The next projects we will tackle will focus mainly on infrastructure. We are looking at repairs to the playground and installing a cash machine, as the nearest bank is in Molai. Residents would be very satisfied if they had a permanent doctor there. And of course, they would also like to have better roads connecting them to other towns and cities, but that is a huge undertaking and beyond the scope of the Tony Julius Fund.”

Legacy Funds at KBFUS – A lasting commitment to future generations

KBFUS can help you establish a legacy fund that will make gifts in your name, in perpetuity or for a specific number of years, to support the causes or organizations you love, anywhere in Europe or Africa.

You can focus on the issue that matters most to you — such as advancing women’s rights in Morocco, promoting entrepreneurship in South Africa, stimulating research in Greece or preserving cultural treasures in teh city of Antwerp, Belgium.  Or you can handpick a beneficiary organization, such as the university where you studied or a museum you cherish.

When establishing a legacy fund, you can select one of our four investment pools for the allocation of the assets of your fund.  If you prefer, you may recommend that the assets be managed by an investment advisor of your choice.

Contributions to a legacy fund can be made during the donor’s lifetime and/or through a charitable bequest.  Because KBFUS is a Section 501(c)(3) public charity, donors receive the maximum charitable tax deductions allowable by law for income or estate tax purposes.

A partnership based on trust

Laganopoulos says that the Bodossaki Foundation considers KBFUS to be one of its closest partners.

“There is a mutual trust,” he says. “We share a common mission and responsibility for improving living conditions. We are excited to help provide support to Kyparissi and its residents. We pay great attention to the principles of transparency and integrity, and I believe this has inspired both foundations to create maximum impact with the Tony Julius Fund.”