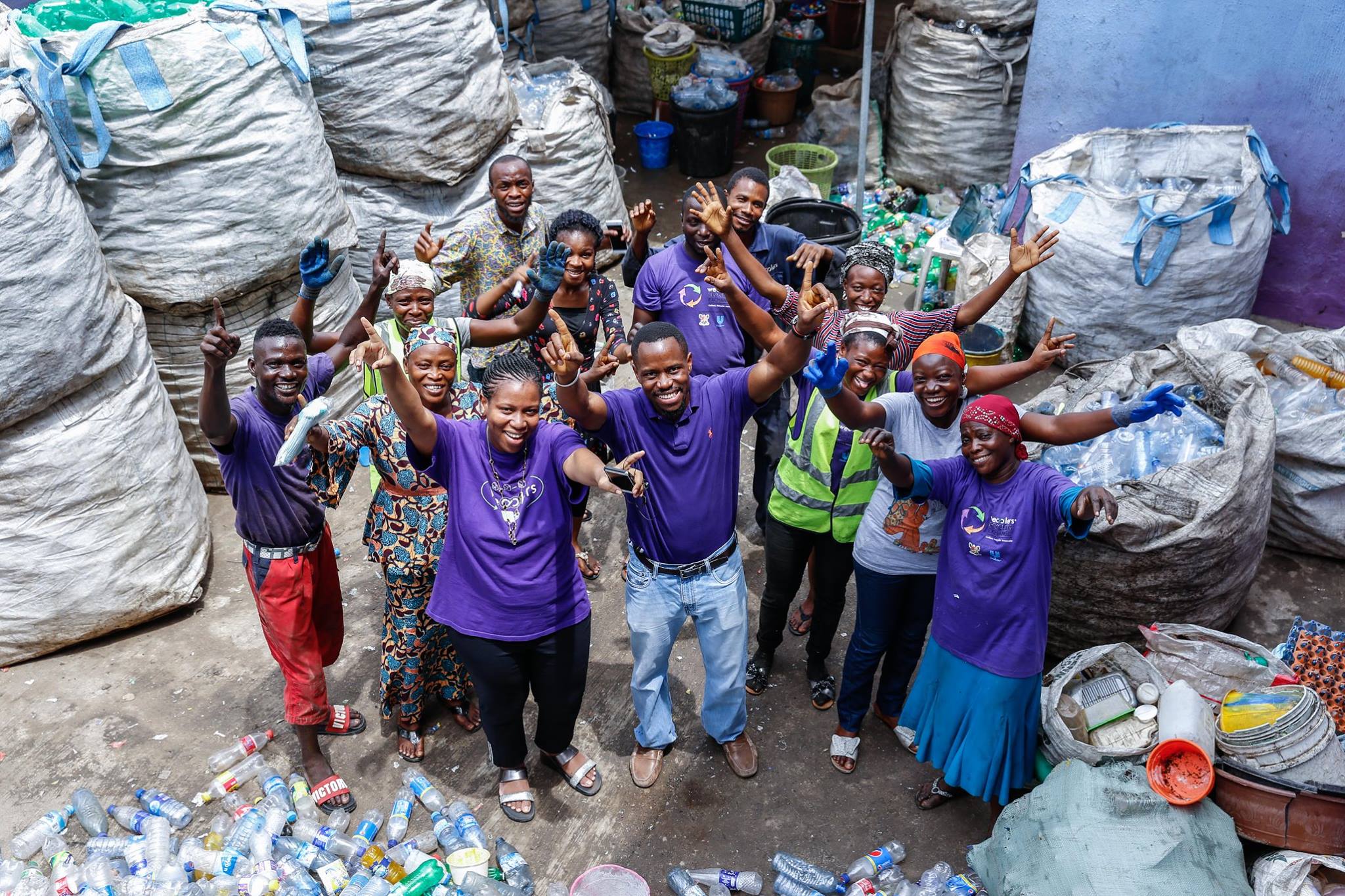 Wecyclers, an urban waste management start-up based in Lagos, Nigeria, received the prestigious Africa Development Prize from our Brussels-based parent foundation earlier this year.  Wecyclers gives households in low-income communities a chance to capture value from their waste, while providing a reliable supply of materials to the local recycling industry. To shine a spotlight on their remarkable achievements, KBFUS is organizing a 10-day roadshow in the United States this October, covering Washington DC, New York City and the San Francisco Bay Area.

Uncollected trash is a huge problem in developing countries. In Lagos, with 20 million people in the largest and fastest growing city on the African continent, the waste mountain grows by 15,000 tons every day. Traditional waste collections by local authorities have always been inadequate, particularly in poorer neighborhoods. And Lagos residents never had any concrete incentives to collect and hand in their waste either.

That was until 2012, when along came Wecyclers….

A Desire to Help People

Wecyclers was started by Bilikiss Adebiyi-Abiola and is now led by her brother Olawale (Wale) Adebiyi. Both grew up in Lagos, and then headed to the United States to pursue their studies. Bilikiss earned an MSc in Computer Science from Vanderbilt University and an MBA from Massachusetts Institute of Technology, while Wale graduated with an MSc in Chemical Engineering from Florida Institute of Technology and an MBA from Indiana University, before joining the largest steel producer in the country.

“The last project I worked on in the U.S. was in Baton Rouge, Louisiana, where we built a steel plant from scratch between 2012 and 2016,” says Adebiyi. “It was a very demanding project, very time-consuming and in the end very successful. The turning point for me was the realization that I was putting all my energy into working for a big corporation and not really doing anything towards helping people. That realization led me to quit my job in 2016 and move my family back to Lagos.”

His sister Bilikiss had already moved back to Lagos and started Wecyclers in 2012. “She had made a lot of headway and won several international awards for her work,” says Adebiyi. “Operationally and structurally there was still a lot of opportunity for growth. I was just going to help her out for a few months until I found other work.”

Then, one day as he was watching the women working at the sorting hub, Adebiyi had an epiphany. “I realized that this was a way I could make a difference. I could use my experience in the steel industry to help grow the company. And it quickly became full-time for me. Bilikiss stepped down in 2017, when she was asked to head the Lagos State Parks and Gardens Agency, so I took over the role of CEO as well as being COO.”

“People used to think that what we were doing was kind of cool.  But now they see us as a serious company that is making a big difference.  They now see the potential that we saw years ago.”

A Business Model with a Cause

Wecyclers sees waste collection not merely as an end in itself, but also as a way of bringing about social change in the poorest neighborhoods of Lagos. Starting with the premise that plastic waste is a valuable raw material, it developed a business model in which part of that value goes back to the residents who collect the waste.

Wecyclers employees travel through residential neighborhoods on low-cost cargo bikes. Local residents give them empty plastic bottles, boxes and glass for which they receive cash or earn credits that they can exchange for food or household goods. This tangible increase in their income has seen residents overcome prejudices against picking up ‘dirty waste’.

Almost 20,000 households are already participating. Based on current growth projections, Wecyclers aims to reach 500,000 households by 2023. The company employs 125 full-time staff, 60 per cent of which are women. Employees who pick up the waste can earn from US$ 200 to US$ 400 a month and sorters make about US$ 100 a month. The national minimum monthly wage is about US$ 50.

Adebiyi explains that all the waste collected is sold to local companies that convert the material into finished products. None of it is shipped out of Lagos. One company makes tissue paper from waste paper, another makes plastic into fiber for the clothing market and stuffing for mattresses and pillows, and several companies recycle glass.

“Wecyclers collects, sorts, compresses and sells,” he says. “We are the middleman. We connect our subscribers to the manufacturers, who used to have to rely on informal collecting systems. But now we are providing a more structured, simple supply chain.”

The Environment and Education

Adebiyi says that in areas where Wecyclers work, people have noticed a huge difference in the amount of waste lying around in the streets.

“There is a massive improvement in the communities where we do collections,” he says. “It’s changing the mindset. It’s changing behaviors. People now realize that there is value in what used to be considered trash. They are earning money by cleaning up. And the environment is benefiting from that as well.”

Wecyclers recently developed a new project where parents can use credits earned from plastic waste to pay for their children’s school fees. This model is being piloted with a primary school, and will be rolled out to many more schools in the future.

An Award to Increase Its Footprint

“We worked really hard to get to where we are. We’ve had a lot of challenges, but we have persevered through them. The prize really meant a lot for all of us,” says Adebiyi. “It validates all the hard work the team has put into making this company work. People used to think that what we were doing was kind of cool. But now they see us as a serious company that is making a big difference. They now see the potential that we saw years ago.”

With plans to expand within Lagos itself, as well as into other Nigerian cities and neighboring countries, the prize will help Wecyclers scale up its model and increase its footprint. But the cash award is just the beginning.

“It’s changing the mindset.  It’s changing behaviors.  People now realize that there is value in what used to be considered trash.  They are earning money by cleaning up.  And the environment is benefiting from that as well.”

The prize also offers its winners unique opportunities to increase their visibility and promote their cause to international audiences.

In April, KBFUS invited Wecyclers to showcase their model during the Skoll World Forum in Oxford, which brings together each year some of the world’s most innovative social entrepreneurs, investors, thought leaders and strategic partners.

And in October, Wecyclers will join KBFUS in Mexico for Opportunity Collaboration, a collaborative summit focused on solutions to global poverty and injustice.

These efforts to put a spotlight on Wecyclers’ remarkable achievements seem to come at the right time, given their ambitious goals for the future.

“We want to raise between $2 and $5 million for Wecyclers,” says Adebiyi. “We have several projects that we need to do to increase our capacity and our production. We want to build our own recycling factory and start converting plastic bottles into new finished products. So we can expand our margins and give back more to the community. That’s really part of our DNA.”