Silks for Thrones and Altars: A Collection of Asian Textiles Goes to Musée Guimet in Paris

In 1966, a young American couple moved to Paris and serendipitously began a modest art collection. Over time, Sam and Myrna Myers developed a love of everything Asian – bronzes, porcelains and textiles. Through her studies at the Ecole du Louvre, Myrna became acquainted with the Musée Guimet, eventually selling them pieces from her gallery and lending others for museum shows. In memory of his wife, Sam donated 71 pieces of Japanese, Chinese, Tibetan and Uzbeki textiles to KBFUS. They can now be admired at the Musée Guimet, which is home to one of the most comprehensive assemblages of Asian textiles in the world. 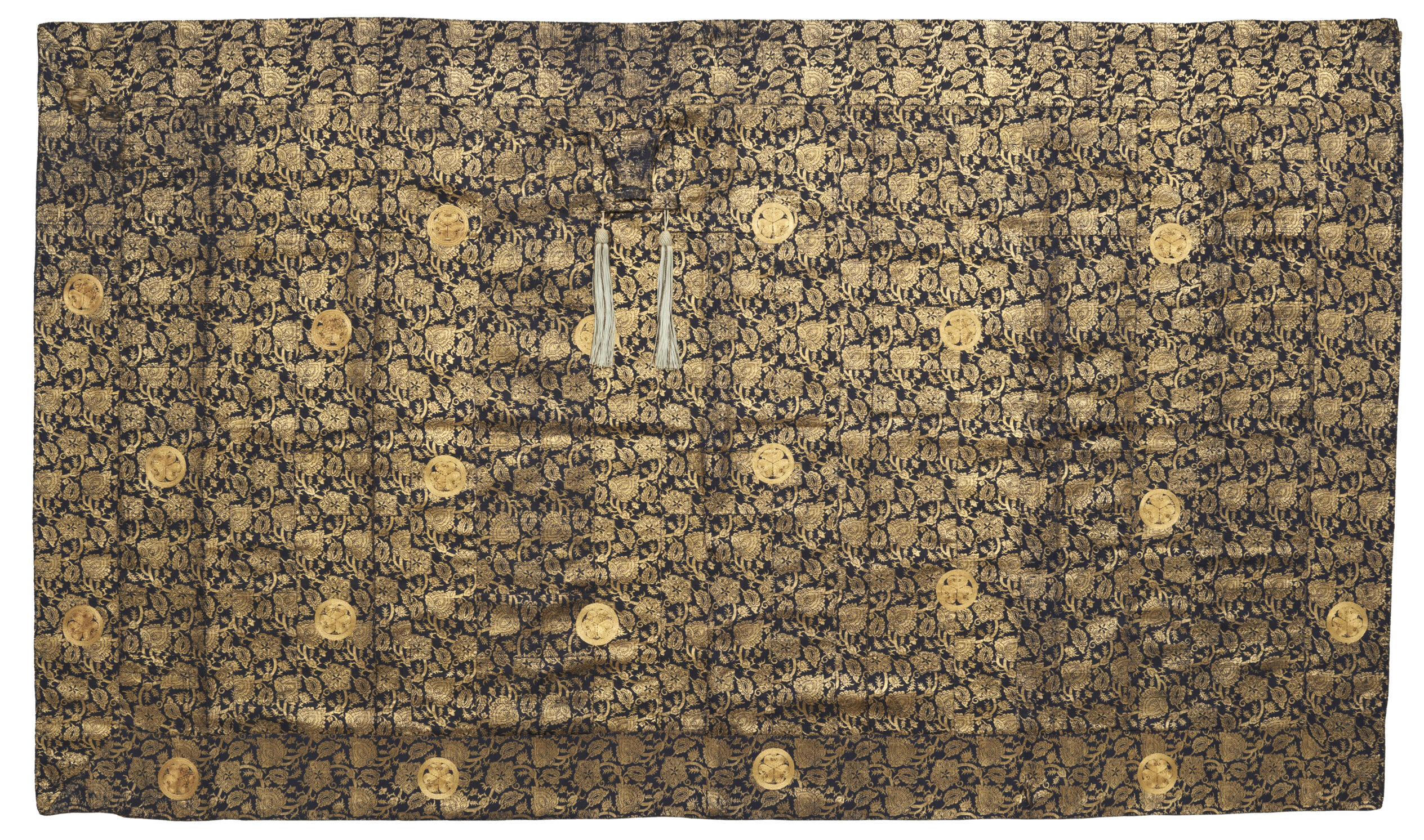 It all started in a deluge that flooded large parts of Italy in 1966. Sam and Myrna Myers had just moved to Europe, where Sam would lead his law firm’s Paris office. He thought they would enjoy a short trip to Italy, but he wasn’t counting on the rain that trapped them in their hotel outside Rome. After three days of that storm, the Myers drove north toward an aptly named hotel he had seen on an earlier trip through Switzerland, La Romantica. Having mistaken Locarno for Lugano, they ended up 50 kilometers away. That Swiss town was not of much interest and so they inquired about antique shops. There was one about seven kilometers away, they were told, in Ascona.

On entering the Casa Serodine antique shop, the Myers were enchanted. Being a young couple of modest means, they could not conceive of making a purchase, until they spoke to the owner, Dr. Rosenbaum. Seeing their appreciation for the ancient pieces, he asked the Myers how much they could spend. Flustered, Sam indicated he could spend $20. To their surprise, this resulted in a call to an assistant for the “Tanagra heads.” Myrna and Sam fell in love with these ancient Greek artifacts. It dawned on them – they could buy and live with beautiful objects.

Later that year, they encountered Chinese antiques at a shop in Ghent, Belgium. “What should we collect?” the young couple asked. The recommendation came: 17th century blue and white Chinese porcelain. Selecting together – the approach the Myers would use with every piece – they left with a box with items that would become the starting point of their Asian art collection.

Back in Paris, the Myers heard about a program at the Musée National des Arts Asiatiques – Guimet (Musée Guimet, for short), where a curator held a weekly clinic to authenticate antiquities. The Myers jumped at the chance and presented their box of “blue and white”. They had indeed purchased some authentic 17th century pieces – as well as 19th century copies.

As Sam describes it, “This revelation puzzled us. The forms, colors, patterns and details were exactly the same. We were determined to crack the code – to understand the difference between authentic 17th century pieces and later copies.” Studious types, they spent their weekends researching, visiting antique shops and markets, looking for treasures, returning each week to the Musée Guimet for authentication. It took a year, but Myrna and Sam ultimately came to understand the difference between original blue and white, and the later copies.

A Gallery with Salons and Collectors

Having a bit more time to indulge her passion for learning, Myrna completed a course on Asian Art at the Ecole du Louvre, while raising their young family. After finishing her studies, she sought a position at the Musée Guimet. Much to her dismay, 35-year-old Myrna was told she had three strikes against her, recounts Sam: “First, she didn’t speak Chinese. Second, she was too old to start to learn. And third, she was American. Myrna was very depressed, so I told her ‘we have this collection already, why don’t you open a gallery?’”

With the support of her husband, Myrna opened a gallery in Paris specializing in Asian art. She hosted salons and for each exhibition, she researched and wrote a summary of the history, meaning and significance of the pieces to be discussed. Over time Myrna became attracted to textiles, a passion Sam shared. A famous collector of Asian textiles, Krishna Riboud, came to the gallery and purchased pieces from Myrna, and the two became close. At her death in 2000, Krishna Riboud left her extensive collection to the Musée Guimet.

In 1995, the Myers met John Vollmer in Hong Kong. “John had been a curator at the Royal Ontario Museum in Toronto; he was a world renowned expert in Chinese textiles,” recounts Sam Myers. Selecting objects together, the Myers had “bought one piece at a time based on their beauty and power, and whether they would want to live with them.” By the time they met John Vollmer, they had spent 20 years amassing Asian textiles.

“After studying the pieces, John asked us if we realized that we had created a comprehensive collection,” recalls Sam with some lingering disbelief. “We told him ‘no, we had no idea.’” In purchasing pieces that spoke to them – “it turned out that when you put them in chronological order by the type of textile, we had created a rather remarkable collection. John Vollmer ended up writing a book on our collection called “Silks for Thrones and Altars.” Once aware of their depth, “Myrna created an exhibition of our pieces and showed it at her gallery in Paris and then later at Asia Week in New York,” recounts Sam with characteristic admiration for his wife. “It was not a great commercial success – I wouldn’t want to exaggerate, but there was a lot of interest.”

Asked what were some of the most memorable pieces they collected along the way, Sam notes “There was a pearl embroidered robe, of Chinese origin. It was exquisite – one of my favorite pieces. Then there was the meeting with a tailor in Hong Kong, who asked if we would be interested in Ming Robes,” remarks Sam Myers. “Of course, we said ‘yes’! You won’t believe it, he had them balled up in bags.” The Musée Guimet learned of the Ming robes and asked to borrow one for an exhibition. That loan deepened the Myers connection with the museum.

Myrna and Sam Myers shared a 50-year passion for collecting during which they both dove deeply into a series of Asian antiquities: archaic jade, Buddhist sculptures, porcelain and eventually textiles. When Myrna passed in 2012, Jean-Paul Desroches, who was Myrna’s professor at the Ecole du Louvre, suggested an exhibition of all the things Myrna and Sam had collected over 50 years. “Myrna had put Jean-Paul on a pedestal all her life,” says Sam. “She hadn’t realized the admiration was mutual.” The force of their connection resulted in a show of the Myers collection at the Kimbell Art Museum in Fort Worth, Texas and at the Montreal Archeology and History Complex in Canada. The exhibition catalogue, entitled “Two Americans in Paris – A Quest for Asian Art,” included Myrna’s beautifully articulated art analysis, originally developed for shows at her gallery.

A Gift for Guimet

Given the vastness and historical value of their textiles, Sam Myers searched for the way to best honor his beloved wife and their life-long collection. He learned about KBFUS ART, an initiative of the King Baudouin Foundation United States (KBFUS) which facilitates gifts of artwork to museums overseas.

“Working with KBFUS has been terrific,” says Sam Myers. “They are very easy to work with and very helpful, and they provided the guidance I needed to structure the gift of an important part of our collection.” In December 2021, Sam Myers donated 71 pieces of Japanese, Chinese, Tibetan and Uzbeki textiles to KBFUS, which placed them on loan with the Musée Guimet. In three years, KBFUS will consider transferring full ownership to the museum. If everything goes as planned, additional textiles will be donated in the coming years.

Dr. Vincent Lefèvre, Director of Collections and Curatorial Affairs at the Musée Guimet, describes his connection with the Myers: “I met Mme Myers when I was curator in charge of the newly created textile section of the museum, and my first acquisition, after the Riboud bequest, was a Noh costume from her gallery.” He continues, “the Myers collection will be a most welcome addition, as their textiles complement the (Krishna) Riboud collection very nicely. We are extremely grateful.”