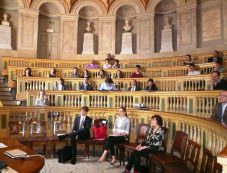 University of Pavia (Italy) reaches out to alumni

The University of Pavia is one of the oldest universities in Europe.  An edict from King Lotharius already quotes a higher education institution in Pavia in 825. Enlarged by the Duke of Milan, it became the University of the Duchy, officially established by Emperor Charles IV in 1361. U.S. alumni and friends can contribute to the American Friends of Università degli Studi di Pavia.