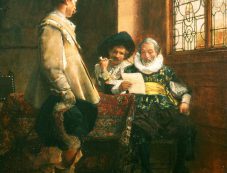 ‘Receiving a Letter’ for the Belvedere in Vienna

Dr. Edward T. Wilson turned to KBFUS ART to facilitate a gift of a painting by Eduard Charlemont, titled ‘Receiving a Letter’. After training in Vienna, Charlemont settled in Paris in the 1880s, where he became known for his genre scenes. The painting can now be admired at the Belvedere in Vienna, which houses the greatest collection of Austrian art, starting with the Middle Ages.